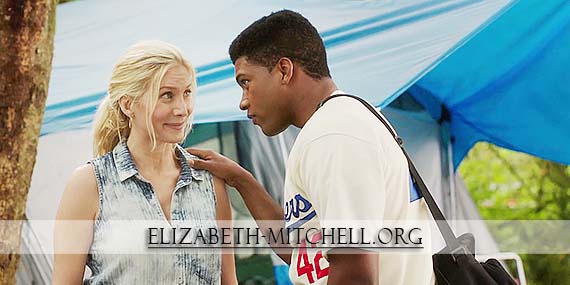 We found this old interview with Eli Goree where he says very nice things about Elizabeth and talks about Joel and Deb. 🙂

Q) He does have a great connection with Deb.

A) I think there is a smoothness to him and a timing, which also goes in well with the comedy I try to bring with him away. He is sure of who he is and I think in a way that Wells was not. Joel was really grounded. That’s the other thing, with the Deb storyline that’s always been there and that’s been cool. It’s a different generation having that love across generational gaps. It’s been interesting to work with Elizabeth Mitchell because she is so amazing. She is such a beautiful person and such a wonderful actress. Every scene I have with her makes me a better actor.

Q) Yes, Joel is friends with the camp counselors but he has a connection with Deb in a different way. Maybe she might be manipulating him or maybe has real feelings.

Q) What were your initial thoughts when you read the beginning scenes with Joel and Deb and the shift that might be happening with them?

A) I was very surprised. I found out who it was that I was going to be working with and then I was excited because I’m a huge fan of her. She’s such a beautiful person. I was definitely surprised when they told me. It was creative and it just fit. It fit with Joel and it was if they met in the middle in their own world. It might not have happened if they met in another place or another time, but since they are at that camp they were able to find that, which was nice. That is real life. There are moments when you have a connection with somebody.

Q) One of the other things I like about Joel and Deb is they bond over their favorite movies, but we also see that between Joel and Amy. How will that friendship further this season?

A) I think for Joel it is his passion. It’s what he loves. So, there is that connection that deepen their bond. He seems himself as a great director.