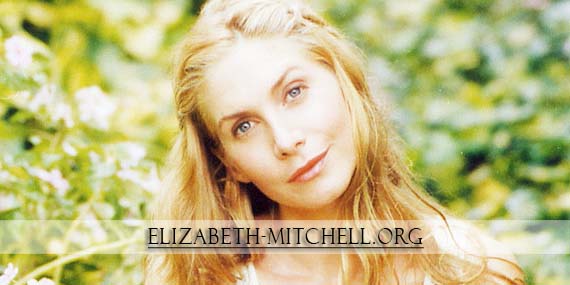 This interview is one of the most beautiful surprises a theater lover could have. She talks about her “sweet little life” and the desire to do theater in New York.

Liz, our dream has always been to see you performing live. If it is in New York is would be even better! We will be there at every single performance because each one would be different, we know.

Elizabeth Mitchell, best known for her role as Dr. Juliet Burke on ABC’s “Lost,” never planned on moving to the Seattle area. But after flying over Washington on a flight from Montana to Vancouver, B.C., she was smitten with the landscape.

“I always loved Vancouver but I wanted to stay in the States,” she says. “So I came to look at real estate and just see what it was like and fell in love with it once I walked out of the airport. I bought a tiny little house, loved it and fixed it up.”

That move to the Puget Sound region happened shortly before her 2006-10 stint on “Lost,” which resulted in her commuting to Hawaii, where “Lost” filmed.

“A film schedule works pretty well for a mom, believe it or not,” she says of balancing her career with raising her son, CJ, who is now 14, in Kitsap County. “With theater you can’t be there at night.”

This past summer she traveled to Winnipeg to film “The Christmas Club” (8 p.m. Wednesday, Nov. 27), her first film for Hallmark Channel. It’s one of 40 original Christmas movies premiering this year across multiple Hallmark networks. Collectively, Hallmark’s holiday films prove as popular as they are formulaic and made Hallmark Channel the No. 1 cable network among women 18-49 and 25-54 for eight consecutive weeks during the 2018 holiday season.

Mitchell stars in “The Christmas Club” with Hallmark mainstay Cameron Mathison (“Murder, She Baked”). Based on the Barbara Hinske novel, the story follows two strangers who meet when they help an elderly woman find her lost Christmas savings. Who wants to bet the two strangers find love with each other?

Mitchell isn’t the only TV and film actor who lives in the Seattle area and travels to work in the entertainment business — fellow frequent Hallmark Channel star Josie Bissett (“Melrose Place”) is another — and Mitchell says it’s a balancing act that works for her.

“It’s kind of wonderful to be able to go away and put 100 percent into what I do and then come home and do exactly the same as a mom and member of this community I really quite love,” Mitchell says. “A lot of my life [at home] is simply centered around being a mom, doing carpools and hanging out with my son. I have a very strong community of like-minded people and it’s turned out to be a really nice fit for me and how I feel about the world and how I choose to walk through it.”

Mitchell, who is divorced, describes time spent with her son and a partner of five years — he commutes to Seattle to work in video-game design — as a “sweet, little life.”

Mitchell grew up in Dallas and has been a working actor since age 7. She says she always intended to explore the Seattle theater scene, but then another TV or film gig comes along that takes her out of town. She recently changed agents with a goal of getting back on stage, possibly in New York, but she doesn’t rule out Seattle. She’s only interested in short-run stage productions.

“I try to work three to four months out of the year,” she says. “I’ve done my bit for this year … now I’m gonna go home and bake bread for a while. It’s boring for some people but for me it really works. I’m not a partyer. That world holds no interest for me.”