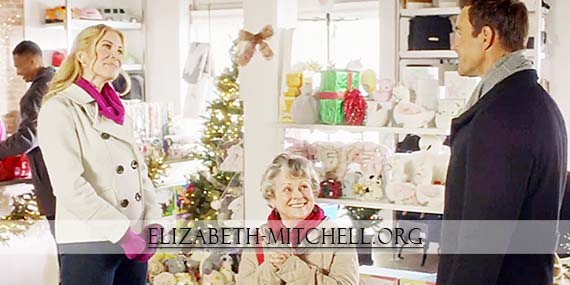 We’ve just found this interview with Cameron and the screenwriter, Julie Sherman Wolfe, where they talk about the movie and Liz.

We so loved the scene where Olivia and Edward improvise that story about how they found the money. Elizabeth was extremely hilarious, all those funny faces and that perfect voice modulation during all the story.

You can actually read Olivia’s mind in that scene… like “I don’t know what I am saying or what I am going to say next, but she needs to believe this, what should I say?” #PANIC #PANIC #PANIC

And when they both say “Isn’t it?” while they look at each other… HAHA!

The network’s 7 Night Thanksgiving Movie Event continues tonight with the premiere of “The Christmas Club,” starring Cameron Mathison (“Home & Family,” “A Summer to Remember”) and Elizabeth Mitchell (“Lost,” “The Expanse”).

Written by Julie Sherman Wolfe (“Christmas in Montana,” “Marry Me at Christmas”) and based on the book of the same name by Barbara Hinske, “The Christmas Club” shows viewers how small, random acts of kindness can make a big difference in people’s lives, and that fate has a way of stepping in when you need it to most.

Of the Jeff Beesley-directed film, Mathison shared with International Business Times at Christmas Con 2019 earlier in November that the movie is very special because of the onscreen chemistry he has with his co-star, Mitchell.

“What I’m excited about this movie is that there’s the humor in it. The lightness, the banter, the humor,” he told IBT. “…[Elizabeth Mitchell] and I are the leads, and we just have a really good rhythm and trust and dynamic and back-and-forth. And a lot more humor and cuteness came out of it than I expected. I’m excited for fans to see that, ‘cause I think that’s something that they love in these movies. The fun.”

For screenwriter Wolfe, one of her favorite parts of the new Hallmark movie is how Mathison and Mitchell perfectly brought to life one of the early scenes in the film.

“It’s when they make up their fake story to [elderly woman[ Gertrude, [played by Gabrielle Rose], of how they found her money,” Wolfe told IBT in a phone interview. “It was exactly how I pictured it, which is them improv-ing a story, and then looking at each other, like, ‘Really? That’s where you’re going with it?’ It was so cute the little looks between them. It was exactly what I pictured. It was great. I was really, really happy with that.”

Wolfe continued, sharing her thoughts on the lead actors: “Elizabeth Mitchell, she’s amazing. She did some stuff in a couple of scenes that really elevated it to a different level that I couldn’t have even dreamt of. It was really good. And Cameron, too. Super charming and funny. Really funny.”