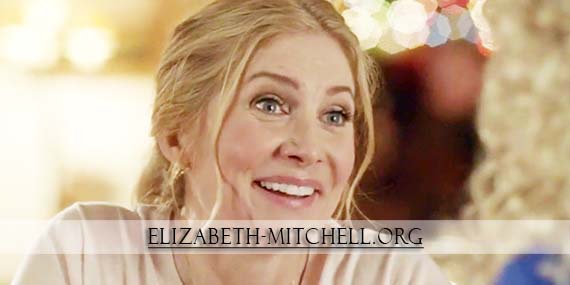 We found this nice review about the movie and Elizabeth. 😀

Speaking of fixins, “The Christmas Club” aired on Hallmark Channel on Wednesday, November 27 at 8 p.m.  This movie, with a great script by Julie Sherman Wolfe, starred the luminous Elizabeth Mitchell and Hallstar Cameron Mathison.  It was based on the book of the same name by author Barbara Hinske (although I’ve read that the movie changed enough from the book that they really are two standalone entities at this point).  The movie was set in Minneapolis but was filmed in and around Winnipeg, Canada.

I hope you all liked it because I certainly did!  During the Christmas movie preview show several weeks ago, this movie stood out for me as one to look forward to.  And it did not disappoint!

I’ve always been an Elizabeth Mitchell fan.  From “Lost” to two of the “Santa Clause” movies to “ER” – I’ve just always appreciated her immense talent.  Then Hallmark had to go and pair her up with Cameron Mathison, who is as solid an actor as can be found – he never disappoints (even when he plays the Bad Boyfriend in “Window Wonderland!”

As for Six Degrees of Kris Polaha, Elizabeth Mitchell is only two steps away.  She starred in 2011’s “Answers to Nothing” with Greg Germann who went on to co-star with Polaha in 2014’s “Atlas Shrugged, Part III.”

Mitchell and Mathison.  Oh my word.  These two were perfectly paired from minute one.  Hallmark is killing it this year with the pairs they’ve put together.  I loved how soft-spoken and gentle Olivia was, and how immediately smitten Edward was with her.

I did have a couple feels with this movie!  Really, I had feels throughout the whole thing.  Julie Sherman Wolfe’s script was dynamic and fun, but also heartfelt without being schmaltzy.

It started off with the two of them giving money to Gertrude, who lost her money in the street due to a gust of wind.  Olivia and Edward agree to pool their money together to give to Gertrude.  That is TOTALLY something I would do if I got a sense that someone was genuinely in distress.  I’d be leary, like Edward, but fully on-board like Olivia.

I laughed when Olivia was with her mom, who mentioned making a meal with all the fixins.  Then Olivia responds by saying, “I like how you say ‘fixins’ like you are from the South.”  It’s those throwaway natural moments that make JSW’s scripts stand out over some others.

I loved when Olivia saw Gertrude at the Christmas festival, and Gertrude says, “My husband works here,” and it’s clear at that point she’s referring to the might-be-the-real-Santa.  Clever girl.

And lastly, I loved how this movie, in the midst of all the various “events,” was basically just two people getting to know each other over the course of time.  That’s so rare in these movies, and it called to mind “Winter Love Song” (which I also loved) from the beginning of the year.  And not only that, but Edward just wanted to spend time with Olivia but still not overstep.

Another funny moment came when Olivia gets mad at Edward, but yet they knew they’d see each other that night.  She says, “Ignore you later,” before stalking off.  So great, and I need to use that.

Yep.  100% I’ll be watching this one again!  It was another mature story, with no silliness, that just gave room for the characters to breathe and get to know each other.

“The Christmas Club” just missed out on the Top 20 for the year but it IS now in my Top 5 for the 2019 Hallmark Christmas movies.  It was a great movie!