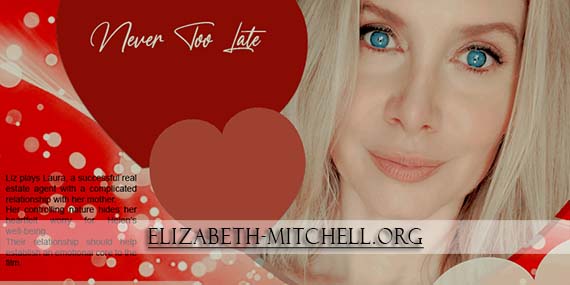 Elizabeth filmed Never Too Late in Summer 2018 (the previous title was “Welcome To Pine Grove!“).

She plays Laura, the daughter of Ellen Burstyn’s character (for futher details about it, go at our  dedicated page).

There is no info about its release yet, but the movie was presented at the American Film Market by Paradigm last November.

AFM is a marketplace for production and distribution deals.

We found a couple of photos from the movie (not with Liz) and some articles.

This article is from November 2019:

Described as ‘Mean Girls’ meets ‘Golden Girls,’ the romantic comedy is being presented at the American Film Market by Paradigm.

Ellen Burstyn and James Caan get flirty over flowers in this exclusive first look from romantic comedy Never Too Late.

The film – currently in postproduction and being presented at the market for the first time by Paradigm – also stars Ann-Margret, Jane Curtin, Loretta Devine, Christopher Lloyd, Elizabeth Mitchell and French Stewart.

The Astute Films feature was directed by Michael Lembeck from a screenplay by Donald Martin based on a story by Harrison Powell. Powell’s original story was inspired by his grandmother’s own experience of moving into a retirement community.

This is from the November 8 issue of Hollywood Reporter:

We found this old interview (from 2018) with the writer of story they based Never Too Late on.

“Welcome to Pine Grove!” is a more personal effort. Powell says it’s based on his wife’s grandmother, who “begrudg­ingly moved into a retirement communi­ty in Jacksonville.” She found it was like “high school all over again,” with cliques set in their ways. But then she fell in love and married two years ago.

Powell knew he had a great story for a movie — “the idea that it’s never too late,” he says.

Bringing the $6 million budget to the table from the start helped a lot, says Powell. “If you have money, that is some­thing that typically doesn’t happen in Hollywood,” he said, explaining that film funding usually works the other way around, trying to raise a budget based on the cast’s star power. Not only did he have the funding, but by filming in Geor­gia, the state tax credit will return 25 to 30 percent of it.

A draw for the cast, he said, was the lack of leading roles for older actors in Hollywood. And he thinks the genre is a good selling point. “There’s not many heartfelt comedies anymore, especially romantic comedies,” he said.

After years of complaints that Hollywood is no place for an ageing actor, this year’s Oscars sees a full 25 percent of its actor nods go to the over 60’s.

With Glenn Close, 71, a frontrunner for Best Actress in a Leading Role (The Wife), she is joined by Viggo Mortensen, 60 (Green Book), and Willem Dafoe, 63 (At Eternity’s Gate) both nominated for Best Lead Actor, while Sam Elliot, 74 (A Star is Born), and Richard E Grant, 61 (Can You Ever Forgive Me?), received Supporting Actor nods.

Unsurprisingly, Close took home the Globe for Best Actress in a Motion Picture/Drama for her heart-breaking performance in The Wife, as a woman who silently allows her Nobel prize-winning author husband to take credit for her work.

So what does this all mean?

“It means that this is the golden age for talented older actors,” declares producer Harrison Powell, set to release his retirement community romantic comedy, Never too Late, later this year.

Based on the story of his own grandmother’s second shot at love after moving into a senior facility following the death of her husband, Powell describes this sweet comedy as “Mean Girls meets The Golden Girls”.

“There’s so much talent in the 60+ age bracket,” says Powell, a venture capital financier-turned-film producer. “We wanted to not only celebrate them but to give this very under-served older audience something  they’re looking for. I think people are starting to realize the buying power of the older audience so, from a financial standpoint, it makes real sense to give this audience something they actually want to see and can relate to. There just aren’t enough films for them.”

In a current climate dominated by comic book block-busters aimed at a prized youthful audience, movies targeted at retirees are finally finding their stride.

When Senior Planet recently caught up with film icon Jane Fonda, she admits it isn’t easy bringing senior projects to the forefront, especially when it involves sex.  “In the US particularly, sex is kind of taboo. It’s weird because there’s pornography, but you don’t talk about it; you don’t really admit that it exists. Particularly if you’re old. Ageism is the word,” says the actress whose screen character enjoys a frisky frisson with Don Johnson’s ageing lothario.

Robert Redford and Sissy Spacek’s romantic crime caper, The Old Man & the Gun, found its niche last year proving that, at 82, Redford is still a ladies man at heart. Likewise, Clint Eastwood, 88, can still pack the Cineplex, recently starring as a 90-year-old Korean War veteran caught transporting cocaine for a Mexican drug cartel in The Mule.

Coming full circle, Powell was surprised – and secretly delighted – to find he had to push back his shooting schedule for NeverToo Late owing to actor availability issues.

“They’re not just sitting around waiting for people to call. Some of them had gigs right before and right after. These older actors now find themselves very busy – thanks largely to Netflix and Amazon – that they weren’t always available. Ellen Burstyn came straight to us from shooting a film with Natalie Portman and is now in Australia doing a play. All the cast were very busy.”

Photo: Still from Never Too Late, courtesy of Astute Films.