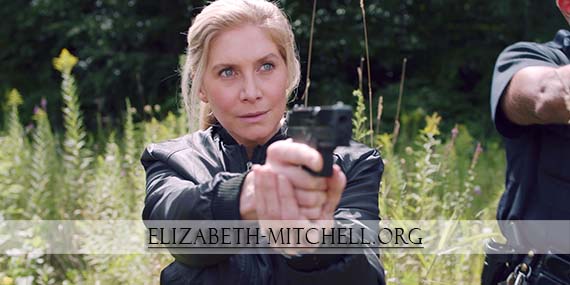 We got the first footage of the movie “What We Found“, Elizabeth filmed in 2017. It is from some sort of presentation video from 3 months ago.

This is actually a video we put together since there was something else in between. It’s not really a trailer, because there’s no actual sound or lines from the movie.

It looks like a really intense movie… that part with Liz’s character and her daughter in the bed seems overwhelming like if Katherine feels the weight of the world on he shoulders. The ponytail gives us Erica Evans’ vibes.

Elizabeth plays Captain Katherine Hilman, involved in the disappearance investigation of Cassie(Giorgia Whigham), a well-liked senior girl of tough public high school in Baltimore County, attended also by her daughter, Emily (who should be a friend of Cassie).

The movie is a murder mystery set in a tough Baltimore area high school, and revolving around two freshmen, Marcus (Jordan Hall) and Holly (Oona Lawrence), who have known each other from childhood. Holly’s home life leaves something to be desired, and Marcus, being small and intelligent, gets bullied a lot. Then Cassie (Giorgia Whigham), a popular senior, disappears mysteriously, and Marcus and Holly’s lives change forever.

From an interview with the actor who plays Art, Holly’s father (one of the two main characters of the movie), we know that Captain Hilman doesn’t like the man very much, probably because he is not the best father and husband.