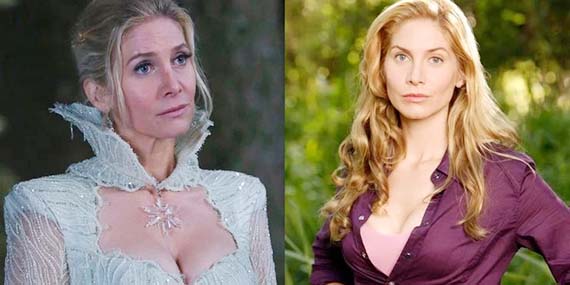 I found this article from yesterday about Lost cast who also appeared in Once Upon A Time.

Lost had a large cast of actors, but plenty of survivors from the island hoped over to Storybrooke to play fairytale characters in Once Upon a Time.

Much like the Snow Queen, Elizabeth Mitchell’s character in Lost started off surrounded by mysteries. Introduced in season 4[NOTE by EMfc: it’s season 3], Juliet Burke was a fertility doctor working with the Others and Ben. However, as her story progressed, she sided with Jack and the rest of the Oceanic 815 survivors. Meanwhile, in Once Upon a Time, Mitchell played the Snow Queen, Elsa and Anna’s lost aunt. After losing control of her ice powers, Ingrid was trapped in an urn by her sister before the events of Frozen. Wanting to reclaim the family she lost, she comes to Storybrooke to make Elsa and Emma Swan her new sisters. But, like Juliet, she ends up helping the heroes after regretting her actions.