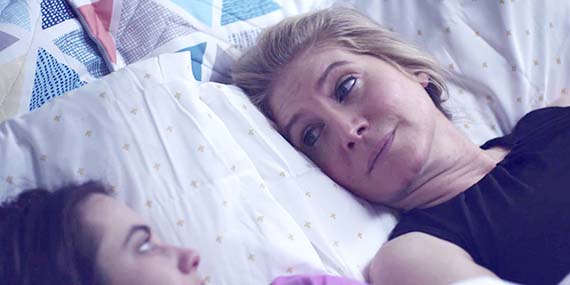 In this review of What We Found they say nice things about Elizabeth.

Marcus (Jordan Hall), Holly (Oona Laurence) and Grant (Julian Shatkin) have been friends for many years, but this is a difficult time for them. Not only are they on the verge of adolescence, with new emotions complicating what used to be straightforward, but the former two are about to start attending a new high school with a rough reputation whilst the latter goes to prep school. Marcus, small and nerdy, is used to being bullied and it’s no surprise to anyone when it starts up again. To make matters worse, his older friend Cassie (Giorgia Whigham), one of few people in a position to help him, disappears.

There are lots of things going on here. Marcus has seen Cassie arguing with her boyfriend. Holly’s parents fight all the time, so the kids are alert to what this might mean. But there’s also drug dealing going on in the area, and a number of violent men around. At first Marcus is reluctant to get involved, hoping that adults will sort everything out, but when the days go by and Cassie doesn’t return, the kids decide that they will have to make some investigations of their own.

Measuring risk is something humans are innately bad at and it’s particularly difficult to do at this age. Director Ben Hickernell understands the psychology of his young protagonists well, imbuing scenes in which they have to get around teachers with as much tension as those in which they risk being shot. We see the world very much from their point of view as they make decisions that adults would be likely to approach differently, so that even when we fear for them as a result, they never come across as stupid – just inexperienced. They also have a fluent set of technological skills that older people don’t, but this is managed n a realistic way and never used to provide a magical solution to plot difficulties.

It would be impossible to review this fairly without making a point of how important it is to see a black hero in this kind of story. It has taken far too long for this to happen and it’s high time young black kids got to grow up seeing themselves as more than sidekicks. There’s also a fantastic female character, with the charismatic Laurence a real standout. When Holly offers to take Marcus’ bullies, one gets the feeling that they ought to run. She’s endlessly resourceful and her unwillingness to put up with adult bullshit will delight young viewers, but we also see the damage that her troubled home life has done to her. Marcus, meanwhile, has a close relationship with his single mother but is at a stage in life where he’s starting to rebel against that.

There’s good work from the supporting adult cast as well. Elizabeth Mitchell makes a lot out of her limited screen time as the police captain investigating Cassie’s disappearance, whilst the ever-reliable James Ransone disappears into the character of a corrupt cop, giving him more depth than is common in this role. Importantly, the adult actors know when to hold back as well, making room for the younger ones to do their thing. It’s the kids we’re invited to identify with and the intensity of their friendship provides warmth in what might otherwise be a grim story.

Though it never quite achieves the magic it’s aiming for, this is a solid little thriller with a lot to recommend it. It’s perfectly targeted at an age group too often ignored in cinema, but adults will find plenty to enjoy as well.