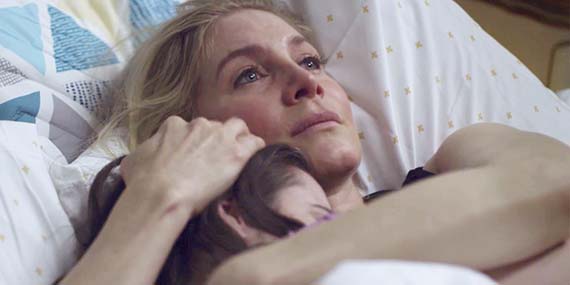 They’ve just released this interview with Ben Hickernell, writer and director of “What We Found” where he mentions Liz in more than once:

Then I had interviews with the actors, and the one thing about Jordan was he’d never done film, which can be an exciting thing, but it can also be a steep learning curve. [We already had] Elizabeth Mitchell, who has done bunch of series and films, and James Ransone, who’s a great indie-film actor, so I needed to make sure he’d hold his own.

“Basically, on set he was great. It was funny, in one of the interviews Elizabeth did, she said, “You’d never know that he was the star of the film. He was so relaxed.” I think that’s true.

“And this movie, I think the nice thing about it was, it was a very positive, collaborative environment, and that was led from the top down in the cast. Jordan was new. He was the lead, but in terms of the mood on set, Elizabeth Mitchell was such a giving, kind person. Her main goal in every scene was really, I think, to give to her scene partner, and so she set that tone. James Ransone has done so many indie films. He’s all about integrity. He just shows up and does the scene. He’s very efficient though. He’s just so, “Let’s just get it done.” Elizabeth is more like, “Oh, let’s try and think and talk about it.

“As I wrote it, the nice thing was that I had this genre frame to put it inside, but it was the personal moments that, as a filmmaker, really got me going, like the kitchen scene. And then also, when I was writing it, there obviously were lots of pressures with the police and the state of police in their community in America. [I included] the storyline of Elizabeth Mitchell being the first female police captain of her district, the pressure she’s feeling from the officers who are kind of pushing up and being like, “Why did she get the job?””

I love the way Elizabeth works, it simply represents the way she is in everything, a giving person. When it’s a project she is involved with, she always thinks as a team with the rest of the people involved and her goal is always to give everything to make the final product the best possible. And the respect that she feels for the people in the scenes with her…. As I said a few weeks ago, she is always focused and concentrated every single minute, she gives all her attention and listens to every single word said by everybody else, which is not just being professional, but also being respectful of other people’s work.

And she is smart… she is one of the smartest people I know. And she understands the human mind like nobody else.

And again I love the women she chooses to play. They always add something to me and make me feel proud to be a woman. My favorite scene of this movie is the one with her daughter… Elizabeth’s acting is breathtaking (I seriously didn’t breath during the whole monologue) and you can see the ideals in Katherine’s mind. Her motivations to be a cop. I love those.

I love how authoritative she is, how secure of herself and her decisions and judgment she is. You cannot fool her, not her. And she genuinely wanna help, she has big eyes to observe and understand what is going on around her. The daughter thinks she’s always fine, but she shows her that she is not. I love how Katherine isn’t afraid to look vulnerable in the eyes of her daughter. This is what I call a bridge in relationship between a mother and a daughter and I truly love that.

“What We Found” is a beautiful movie, still on demand and available on DVD, so if you haven’t got the chance to watch it, please do.

Movies like this about bullies should be watched by an entire family, kids with their parents, because everyone should understand how hard it is to be a teenager (when we grow old some of us forget) and how much good parents worry about their kids and they have so many things and responsibilities to take care of, which most of the kids do not understand.There’s this discussion between Marcus and his mom which felt pretty true and real as well. Sometimes I feel like the relationship fails on both sides and everyone should make an effort to make it work. The bridge.

Months ago Ben Hickernell already said lovely things about Liz. I’m reposting them since it gives me always so much joy to read and hear positive things about her.

Every day on set with Elizabeth was special. The most giving performer. A team player. A generous soul, leading with experience and kindness. Even among a fantastic cast there was something special about her energy.