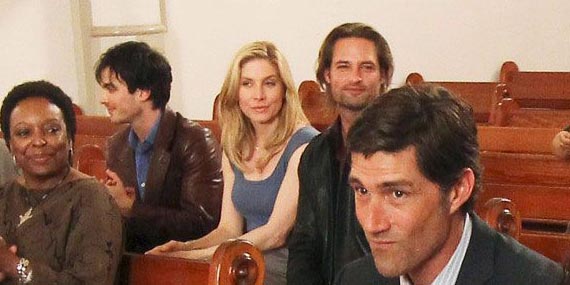 I’ve jus found this never before picture of Lost finale and a little interview with Liz, Josh and Damon Lindelof who talk about Juliet and Sawyer. The outlet also posted a part of the script of the awaking scene.

Here’s the part about Liz:

Vulture did extensive interviews with writers, cast, and crew members, who reflected on the development of “The End,” the making of the still hotly debated episode, and the cultural conversation it continues to generate. Because, yes, of course, we had to go back.

One of the more emotional trigger moments involved Lost power couple Sawyer and Juliet realizing that they had known each other in another life on the island.

Holloway: I remember going, “Man, is this going to be cheesy?” Like, I’m getting a Coca-Cola and I touch her hand and I have to do this thing where I have this flash of memory. We were all thinking, Oh man, I wonder if it’s going to work. And when they did it, it was awesome, I thought.

Lindelof: We made sure that people understood that in the ever-after Sawyer and Juliet were going to be together. Those things were musts, they needed to be serviced. And hopefully the good side of fan service, where the fans really want you to listen to them.

Elizabeth Mitchell (Juliet Burke): I remember [while shooting that scene] the air conditioning was rattling like crazy and it was driving sound crazy and then we were all talking about it. Then I just looked at Josh and the characters were just there and it was — I just remember thinking, Oh yeah, here we are.

Holloway: Elizabeth was so sweet, is so sweet, as a person. Like, you can’t shake her. I tried to get her mad. I’d just be an asshole sometimes, like being Sawyer-ish on set. She would just be like, “Oh, Josh.”

Mitchell: Jack was filming that scene and I ended up so grateful he understood that we needed it to just go until [the right emotion] was there and I think that’s what we did.”

Full interviews with other cast&crew members is on their site.

Thank you @livthompson815 for the heads-up about the article.

Check on instagram the part of the script I was talking about: