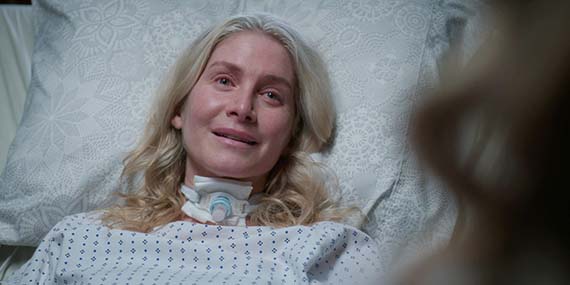 I knew this was gonna be heartbreaking, but it was also moving in the best possible way.

The love between Dannie and her husband was so real, so genuine. And Dannie being so brave. I am so grateful to Liz for giving me (and all of us) this role. Her courage is something I will look up to. I needed it.

Her performance was incredible. The fact that Liz was basically immobilized in bed and had only her face and voice to convey emotions… And no much energy in her whole body, so this had to be done leaving a part of you behind. It’s like having not the entire yourself to express what your character feels and at the same time it’s like that is part of how your character is. I am not sure if you get what I mean, but yes that is what I think, when I think about how incredible she is as an actress. She doesn’t need much to make you feel how her character is feeling, her thoughts, her emotions. What Liz is able to access when she portrays someone is a true gift to me.

The love between the two characters was heartwarming despite the circumstances.

How Liz had to process all the emotions of a person who has been in a coma for 10 years and then woke up, knowing she missed so much from her life, but grateful to be awake, to have her husband still by her side (which is amazing btw, I love her husband). Having hopes for the future. And then… this news. It won’t last. Only 24 hours at most. Dealing with that for herself, dealing with that for her husband. Giving her husband a closure. The peace he needed. Her being strong enough to accept it for herself, to accept it also for her husband, because for sure he wouldn’t be able to do it on his own. And the memories. The love they had for each other, the love they HAVE for each other, the love they will still have for each other even after she’s gone. Relationship goal. Thinking about a future together that they can’t share physically, but believing that it would be something that they will share together anyway. Giving that last gift to her husband, the thought that she will be there with him in Costa Rica. And then she falls asleep forever. Leaving me sobbing and grateful for the experience.

Thank you so much, Liz!