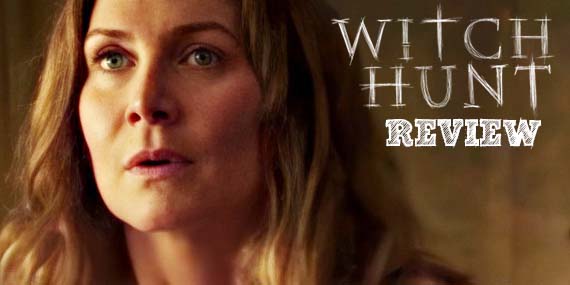 I found 3 more good reviews about Witch Hunt! As always they contains spoilers. 😉

There are going to be a lot of comparisons made concerning this movie.

It’s rabidly anti, anti-woman (because, Witches) if that makes sense, so the words “Handmaid’s Tale” will pop up.

Analogies to LGBTQIA+ issues, BIPOC rights, and assertions of contemporary fascism are all there to be made…

You don’t need to assign such current-event symbolism to Witch Hunt to understand its most basic point: people shouldn’t be lumped together for any reason as a means to define or control them.

They should be judged as individuals based on their own behaviors.

There. I said it.

Whoever watches this can and will use it as “evidence” of whatever socio-political cause they hold dear, and bludgeon anyone who shows the slightest deviation from that particular point of view with it.

Which only proves the central premise of the damned film.

Now, to finally talk about it as an actual film; Witch Hunt is really good. A solid script based on an alternate American history, where the anti-witch hysteria in New England never died out, and, in fact, grew into a central tenet of the United States governmental system.

And apparently, the good old US of A is on its own in that regard, as the film find witches fleeing south across the Mexican border where they won’t, presumably, be subjected to “prick tests,” “float tests,” or any other pseudo-scientific methods of detecting witches.

Elizabeth Mitchell, as the mother to a troubled teen in a border community, provides a solid base for the family unit, until a BWI agent (that’s Bureau of Witchcraft Investigations) comes sniffing around. This is super bad because he’s a multi-generation witch-hunter with a pocket barometer, another bit of “science” used to detect the presence of magic, and thus, witches.

Mix into all of this the normal teenage angst of Claire (Gideon Adlon), who’s trying desperately to survive an otherwise typically terrible high school life as her mother uses their home as a stop on the underground witches railroad, and the cauldron is primed for an explosive climax…

…which also ends up being a nice homage to a classic feminist film.

I’m not sure where Witch Hunt will end up being seen, but if it was up to me, I’d buy it, turn it into a 2-hour pilot, and then a 10-episode series (to begin with, anyway).

It just feels like this is a solid underpinning for an ongoing series, just like, and I can’t believe I’m saying it after what I said above: The Handmaid’s Tale.

Contemporary America, witchcraft is real and witches are persecuted. An underground railroad is in operation smuggling the red-headed witches over the wall to safety in Mexico. Claire (Adlon) is a high-school misfit whose mother secretly shelters witches but Claire (unsurprisingly) is not quite what she seems. Though it plays like a feature length pilot for a teen-witch TV series, Witch Hunt offers some effective moments of suburban-gothic. Camargo is particularly good as the hard-boiled witch-hunter. There is a tendency to buy cheap jump-scares with orchestral stabs which undercut what is actually more successful as angsty teenage melodrama than horror. And though the witchcraft on show seems a little underpowered the characters are well drawn enough to suggest a life beyond the frozen final frame.

There isn’t anything better than a good modern day witch story — the kind where you contemplate not only how you would react if they do exist, but if they just randomly turned up in society. Questions would arise to be sure. How would we treat them? How would we make or shift laws for example, to accommodate these ‘magic beings’ and their powers. Luckily we have “WITCH HUNT” (2021) from director Elle Callahan to guide us through what those challenges entail.

The film centers on Claire (Gideon Adlon), a young woman whose mother Martha (Elizabeth Mitchell), offers a way station of sorts in Southern California for fugitive witches on the run. It’s essentially a safe haven for witches as they wait to be smuggled out of the country by an Underground Railroad network of sympathizers lead by Jacob (Treva Etienne). An opening scene of men with rifles presiding over a pale, young red-haired woman being burned at the stake continually flashes throughout the film as it’s part of the nightmares Claire deals with nightly. We quickly learn from this that witchcraft has been outlawed in the US and a ‘Bureau of Witchcraft Investigations’ not only exists, but it’s agents are officially charged with rounding up offenders and shipping them off to detainment camps. One such agent of this bureau is Hawthorne (Christian Camargo), and he has no qualms about handling things in the old Salem way. Having witches constantly in and out of her home bends Claire the wrong way and she starts to despise the process. It’s not until Fiona (Abigail Cowen) and her younger sister Shae (Echo Campbell) arrive that Claire reconsiders her prejudice of ideas, and discovers a big secret about herself in the process.

While at times a bit clunky, Callahan still manages to not only give us a good story, good acting, she also incorporates many well-known superstitions about witchcraft. The most pertinent includes the “sink test,” where a woman suspected of practicing witchcraft is bound to a chair, thrown into a body of water and if she surfaces rather than sinking, well then she’s definitely a witch. That ‘Witch Hunt‘ shows this “test” being given by government agents to a group of teenage girls feels especially disturbing. It’s effectively comparing the singling out of one group of people, in this case, white, red-haired woman, in a sneaky and very effective way of noting modern day immigration realities that many are experiencing at this moment — being shown through one of the best modes of political storytelling – the horror movie.