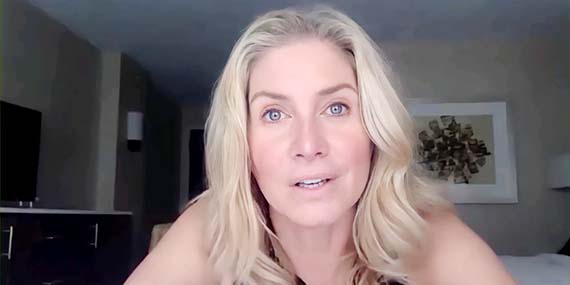 They released another interview with Liz, the cast and the director of “Witch Hunt”. I love reading Liz’s thoughts about her projects and haha I remember the videos with bats Elle posted during filming. Spooky movie with real effects! Amazing.

In Elle Callahan‘s sophomore film WITCH HUNT, modern America has accepted the existence of witches but has decreed the act of witchcraft to be illegal. During this time, a sheltered teenager (Gideon Adlon) finds herself facing her own demons and prejudices when she helps two young witches (Abigail Cowen & Echo Campbell) avoid law enforcement and cross the southern border to asylum in Mexico.

For the SXSW World Premiere of the film, Nightmarish Conjurings had the opportunity to speak with writer/director Elle Callahan as well as actors Abigail Cowen, Elizabeth Mitchell, and Gideon Adlon about how the film parallels the way the United States treats immigrants, why they needed a bat wrangler on set and more.

Thank you all so much for taking the time to talk with me today about WITCH HUNT. To start things off, I want to dive into the story and the correlation it has with what we are seeing in the US with immigration. Elle, can you talk a little bit about how this story came to life?

Elle Callahan: Big first question (laughs). Well, it kind of formed pretty organically. I always wanted to do a movie about witchcraft and I really wanted to modernize it. So I kind of just thought if witchcraft existed today and we just dropped it into modern America, how would it actually exist. Witches throughout history have always been labeled as “others”, whether it be women who are educated or living a less conservative lifestyle, or people who live longer are just lucky, things like that. I looked at how America treats their others and it’s not great, so I kind of just let it grow organically as I was writing it. All the ties that it has to other minority groups in our country just kind of formed. Unfortunately, I think that people who are [perceived] as different may be scary [to some] at first, but there will always be goodness and acceptance and I think that will persevere. And so I wanted to highlight that as well.

For the cast, how was it working with Elle on this project? Also, since there are multiple references to Thelma & Louise, was that something that Elle made sure you all watched prior?

Gideon Adlon: It’s funny, before my first meeting with Elle I had just seen Thelma & Louise at Cinespia, when they were still doing movies, and I loved it so much. Then I had this meeting [with Elle] and I was so excited. Working with Elle was great because her directing was incredible and her vision was so strong. That’s also why I was so excited to be on this project because she never settled. If someone said we couldn’t do something, she was like “no, no, no, this has to be the way I want” and I like that. It felt like working with a friend, the whole set was just so great; but with Elle, it was like working with a friend. She made it such a welcoming environment.

Abigail Cowen: I agree completely. You said it perfectly.

Elizabeth Mitchell: You really did. I felt so safe, our choices were respected, but she also had everything firmly in hand. When that happens, when someone absolutely has a vision and knows what they’re doing and has it lined up and does so with such grace and strength, it’s a joy to be there. You get to play and do your thing, and you don’t have to worry about anything else. And some of the shots she came up with were like art, so I’m excited about that too. It’s a nice combination and it was exciting to work with a strong woman on a womanly project filled with strong, interesting, independent women. I loved it.

Abigail Cowen: And there’s a certain element to when you are just in a predominantly female environment. There’s an element of empathy and grace and just this warm feeling while also not having a need for harshness. Elle had everything planned and she knew how she wanted to do it, she was on it, and people listened and it was great. Everything just ran smoothly as opposed to like a hectic set where people feel like they have to yell and they have to freak out…

Elizabeth Mitchell: Even with the bats, right!? One whizzed right by the camera…

Gideon Adlon: Elle, the way you kept your cool, and in certain situations it would have been so freakin hard to keep your cool, you just did.

Wait wait wait… I want to know more about these bats!

Elle Callahan: We had a bat issue for a good portion of the shoot.

Gideon Adlon: We had to get a bat wrangler!

Gideon Adlon: I actually have a video of me and Elizabeth standing next to each other and a bat flies right past my face and we are in the scene and the second it was done we’re both like *swings arms around manically* (laughs).

Elle Callahan: My editor looked at the footage and he was like, “Did you already put some special effects in there cause there are bats in some shots” and I was like “not special effects, don’t use those shots please, those are real bats” (laughs).

I’m going to nerd out for a second but was the exterior shot of the family’s house the same one from Annabelle: Creation?

Elle Callahan: It’s a house that’s not like a real house. The first floor looks like a house, then the second floor is all open so you can take the ceiling panels out to shoot. Because it’s all open, it’s a great place for bats to live.

How much research did you do into witchcraft and was there a reason that the witches were commonly referred to by their hair color?

Elle Callahan: I did a lot of research, I knew a lot about witchcraft but I wanted to obviously study up. About a year prior, I asked for a lot of witchcraft books for Christmas and my parents, who are very Catholic, were like “Why?” (laughs). And I was like, “It’s for a movie I swear!” (laughs). The more research I did into it, the more I found that witch-hunters were very common and accusing someone of being a witch was a very normal thing. We think of it as being something that happened in Salem and it was this one-off but no, it was very, very common. It was people’s jobs to be witch-hunters and they would go around to different towns and they would be paid to smoke out the witches, who usually were just older women, and people wanted their land but [these women] wouldn’t move off their land. Or, you know, girls who were staying out at night or doing things when they were unmarried. It kind of fascinated me that it was so ingrained and normalized in society and now we look at it like it wasn’t. So I thought, let’s just put it back into society again, modern-day, and see what would happen and this is what I think would happen.

As for the hair thing, I kind of just wanted to show witchcraft not by just their powers but also how certain types of discrimination can be born, and a lot of it has to do with how you look and I thought that hair color would be an interesting way to represent that.

Outside the serious and very important topics of immigration and the treatment of marginalized groups, what else would you like people to know about WITCH HUNT?

Elle Callahan: Keep an open mind and watch the film and enjoy it, but also know that it is meant to say something about our world today.

WITCH HUNT had its World Premiere at the 2021 SXSW Film Festival.