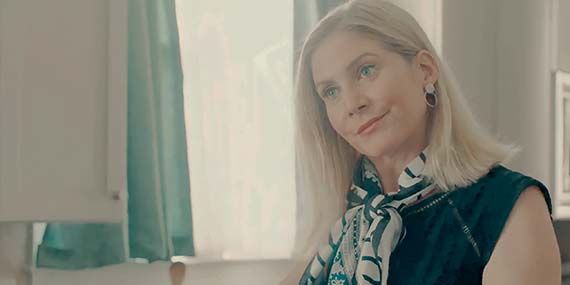 I watched the movie at the Virtual KCET yesterday and I wrote my thoughts about it, about Laura, her relationship with her mom and Liz’s performance. Spoiler Alert if you haven’t watched it yet.

This movie made my heart very happy. There was more sadness than I thought, but it speaks the truth. At the same time I think all the sad parts make the happy, positive and hopeful parts more credible and genuine, so I love all of it.

Obviously what I was looking for the most was the relationship between Laura and her mother, even though I enjoyed the entire movie and all the characters. The cast was terrific.

Laura and Helen are more similar than they think, which is actually what causes the contrasts between them. The nature of trying to be in control is something in common. In the past Helen controlled Laura, now it is Laura who is trying to control Helen and she took that as a way of living.

When Charlie died they fell apart, I think he was some sort of a cement for their relationship, a bridge between them. Sometimes it happens that when the father/the husband dies, mother and daughter fall apart, especially if they are cut from the same cloth like Helen and Laura.

The truth is that Laura knows Helen is not able to live alone anymore, but Helen doesn’t want to admit that she needs help and it’s hard for anybody to admit that, but it’s harder for people who have always lived in control of their own life.

Clearly here it’s not just a matter of Laura being a business woman, of needing her space and of thinking not to have time to take care of her mother. There’s a fracture in their relationship which would cause stress to both of them if they lived under the same roof, and just the fact that they are both stubborn and not ready to listen one another it would be a total distaster.

I’ve thought about this, because you can think that Laura is a bad person for not letting her mom stay in her house, but they would drive themselves crazy. And there’s a resentment about her dad, which is still there, because Laura wasn’t allowed to deal with his death the way she thought she would have to and at the same time his death still affects her, not just for the loss, but also because her relationship with her mom became more complicated after he father passed away.

I knew from the brief character’s description (and alsot he sneak peek) that Laura was going a control freak, but I didn’t imagine how Liz could portray that aspect, so the way she did was totally unexpected. How this woman can still surprise me after 2 decades of knowing her is beyond me. Well I guess she wouldn’t be the talent that she is if it was otherwise.

Laura talks really fast, like she is always in a hurry. She doesn’t spend time bonding with strangers, she doesn’t even consider the kindness or actually the kindness used when people want to sell you something. She is a real estate agent, she doesn’t believe in that, because that’s what she must use for selling properties, so don’t try to get her by being extremely nice (I am talking to you, Pine Grove’s director), she won’t buy it. She goes straight to what she wants, she is determinate, resolute, she doesn’t need frills, thank you very much. All these strategies are so familiar to her, so don’t use them with her. It’s a waste of time, especially a waste of her time.

She looks at her watch constantly, always with her mobile in her hands and her mind is already to the place she needs to be, but she cares for her mom. When Helen says “Ok I’m going back to my cell”, you truly see how that affects Laura. You see how sorry she is for her mom and she doesn’t want her to see her like this.

She is used to go straight to the point. “I don’t want her at home with me, but I want my mom to be happy. I don’t care how you do it, but do it. Give me that and I will give you what you want, otherwise I’ll be your worst nightmare.”

Basically this is what she is telling the director, very straightforward, direct with her tone of voice and all her facial expressions that say “this is the deal, I can tell you with a smile on my face, but you don’t get through me. I want what I want. Stop the crap, and STOP WASTING MY TIME.”

When she gets the phone call from Jane, she is working with the computer, she answers and she keeps working, but she stops when she hears that it’s about her mom. That is the key to get through her. It’s a very high wall, but it’s right there.

Also when she thinks about the fact that her mom loves flowers… in that exact moment you see Laura’s feelings, even if she spent the whole time hiding them in front of everyone.

And then she finds out about her mom’s relationship with Dan. That drives her completely mad and upset. First of all she didn’t get over her father’s death, so “mom, how could you? what would dad think?” And accepting her mom is moving on, when she’s not ready to move on, it’s like her mother is leaving her, and the truth is that she misses her dad like crazy, but she also misses her mom like crazy and she’s still there.

Peter is a perfect substitute for that bridge between Helen and Laura, because he seems the only one who is able to make Laura stop talking and trying to control everything and listen, truly listen. I love that guy, and I love how he is with his grandmother. We need more people like him. He won my heart since the first scene.

At Jane’s party, Laura is so upset and broken, and scared and afraid for her mom to have a broken heart, that her nature of controlling things failed, because not only she couldn’t control what was happening there and prevent her mom to suffer, but she could control her emotions, like she managed to do the whole time. That is the crack in Laura’s wall, where you can truly see her through and clearly for the first time. Her love for her mom opened the door to get through Laura.

The last scene when they finally talked to each other, where Helen recognizes her mistakes and Laura opens that door and admits with herself and with her mom that she has truly missed her, that was the emotionally satisfying scene I was looking for the entire movie.

The wedding is truly the cherry on top. The entire movie was emotional, hopeful, funny, but there were naked painful truths, which made QUEEN BEENS not just a comedy for who still wants to believe, but a glimpse on what reality is for elderlies and it’s not just pain and it’s not just happiness, it’s simply life. Life keeps being the way it is while we are lucky to be on this Earth and our loved ones are blessing us to be here with us.