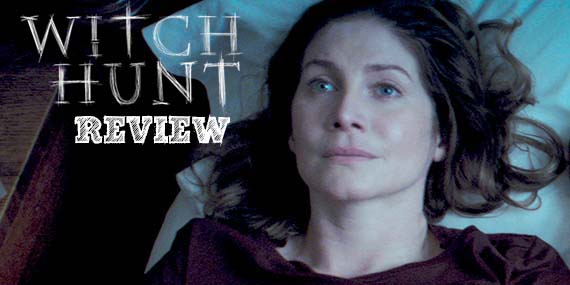 There’s plenty of strong performances throughout too. The mother is played by Elizabeth Mitchell. Probably best known for her role in Lost but I personally recognised her instantly as Mrs Claus in Santa Clause 2 & 3. She can always be relied on for a good performance and Witch Hunt proves no different.

Set in a modern America, Witch Hunt tells the story of two young witches in a world where witchcraft is illegal and punishable by death. These two young witches are helped by a woman who is trying to aid them over the southern border to asylum in Mexico. They are soon met with many obstacles including the daughter of the family who must decide which side she is on.

Despite a new The Craft movie and a new Witches movie coming out in the last year, witchcraft in film hasn’t exactly had a resurgence. It’s a sub genre of horror that, despite some popularity, has never completely took off and been over popularised with films. Because of this, theres opportunity to make original and fresh films on the subject matter. Witch Hunt tries to do exactly that.

Witch Hunt does do a really good job of placing witches in a modern real-world setting and putting them in a sadly believable situation. In this world witches are seen as the enemy. As something that the world needs to be rid of. This is of course the case for many minorities currently and we see witches desperately trying to reach the Mexican border, hiding in boots of cars and secretly living in people’s homes.

The movie takes no time to get into the more horror-filled subject matter as the, kind of brutal, opening scene shows a woman burned at the stake while her two young daughters watch on. But although the main story is about the two girls, it maybe doesn’t focus on them enough and instead shows various stories around their lives. In fact, it feels like quite a while until we see them again. What we do see is the family of the woman who will take them in and help them (hopefully) cross the border. We see another witch arrive and leave the house, we see issues with the two sons and the older daughter, we get to know a little of their back story, there’s even some extra supernatural stuff going on. It’s maybe a little too much because we don’t hear enough about any one thing.

That said, this is a small complaint and there’s much to enjoy. Witch Hunt looks great, set in an almost wilderness, the scenery is fittingly bleak at times. There’s also some simple but really good effects. The scene between the two girls in a bar is prime example of this as one of their witchcraft ‘powers’ comes to light.

There’s plenty of strong performances throughout too. The mother is played by Elizabeth Mitchell. Probably best known for her role in Lost but I personally recognised her instantly as Mrs Claus in Santa Clause 2 & 3. She can always be relied on for a good performance and Witch Hunt proves no different. As her daughter, Gideon Adlon, adds to her increasingly impressive C.V. (she was also in The Craft: Legacy) with a really strong performance, while Christian Camargo (Dexter, Penny Dreadful) is only in the film briefly as a government agent but is highly memorable. His key scene is reminiscent of THAT first scene in Inglorious Basterds. A brilliantly played tension-building scene that has a great score too, as his character suspects witches are in the home.

There’s plenty of twists and turns before those final credits role and this finishes on a high. Elle Callahan’s Witch Hunt feels like a refreshing and original take on witchcraft. Something that was very much needed in 2021. Maybe this will start that witchy resurgence many horror fans have been waiting for.

Amendment XI : No person may practice Witchcraft in the United States of America.

In present day America, female witches are publicly burned at the stake and considered a danger to the American way. Martha Goode (Elizabeth Mitchell) runs an underground railroad for witches in her house, through a system of signals she provides food and shelter until they can get safe passage to Mexico. Her daughter, Claire (Gideon Adlon) thinks her mother is crazy for harboring freaks.

Once two sister witches show up (Abigail Cowen & Echo Campbell) Claire starts noticing strange things happening. With the government sneaking around trying to uphold the law and nosy neighbors with nothing better to do than make themselves feel better by reporting “illegal” activities, Claire will learn about the moral grey area’s that come with how people perceive those who are different.

Fear motivates people to act out without logical thinking. In this world, witches are not only powerful beings but pose a threat to the natural way of life (sound familiar?). Prosecuted for just existing, judged without reason, and murdered to maintain the status quo, women are victimized for no reason other than men fear their power.

Writer/director Elle Callahan directs a stellar cast of women in this film, however the plot feels like it was an aborted spec for a Charmed/The Craft reboot that is slow moving and could of done more to build a world in which witches are treated the same way our (American) government treats undocumented people. Ominous with tone, subtle but affective special effects and strong performances from its leads makes this feel more like the pilot of something pretty great.