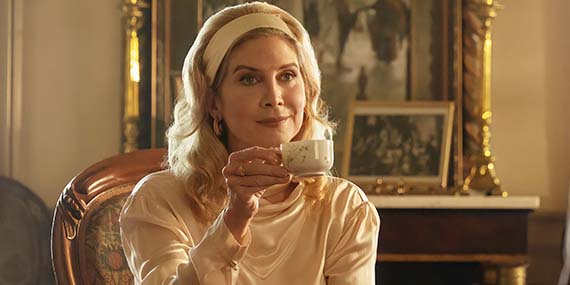 And a new character Limbrey, played by Lost‘s Elizabeth Mitchell, seems a little scary as she makes it clear to Pope that “John B is not the only one Ward double-crossed.”

hahaha! YES! That is what I thought. SHE IS SCARY! She looks dangerous and I love her.

Don’t let the beauty shots of The Bahamas lull you into a false sense of security: John B, Sarah Cameron and the Pogues are in a lot of danger in the newest footage from Outer Banks Season 2.

“John B, we are fugitives in a foreign country,” Sarah reminds her boyfriend in the full trailer, which Netflix released Wednesday. She then asks him not to do anything stupid but… has she met him?

The approximately two-minute spot opens in familiar territory: Kiara, Pope and JJ mourn John B, whom they believe died in a storm alongside Sarah while trying to escape a (false) murder rap. Meanwhile, as John B says during the video above, he’s very much alive but just trying to clear his name so “this can all be over.”

Eventually, John B’s pals realize he’s still among the living — the trailer shows the gang reunited, albeit running from some sort of imminent peril. On that front: Sarah’s angry/unscrupulous father Ward is hot on their trail, and a new character Limbrey, played by Lost‘s Elizabeth Mitchell, seems a little scary as she makes it clear to Pope that “John B is not the only one Ward double-crossed.”

And, of course, there are lots of guns, people jumping off boats, explosions and Kiara taking great pleasure in messing with the guys for being scared.

Outer Banks returns for Season 2 on Friday, July 30. Until then, press PLAY on the trailer above to see what else you can glean about what’s ahead, then hit the comments with your thoughts!