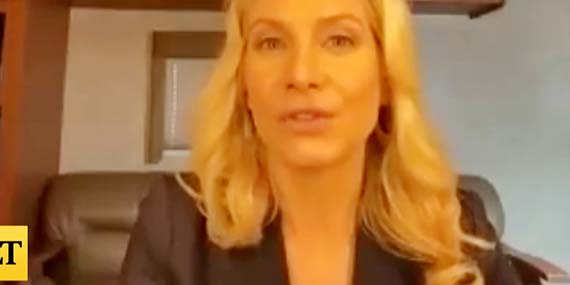 Elizabeth did a new video interview from #FirstKill trailer.

Talking from another show set for the release of Outer Banks.

Find out if she would like a Lost reunion, if she is in contact with other cast members of the show, what she thinks about Lost finale…

Yes, no spoiler about Outer Banks, but so happy to hear her talking about all these things. ❤️

Elizabeth Mitchell isn’t ruling out a Lost reunion. The Outer Banks actress opened up to ET about the upcoming season of the Netflix series, a possible Lost reboot and reuniting with the cast after the epic series finale of the buzzed-about ABC series.

“It’s, of course, a possibility that someone might choose to bring it back in new and different and exciting ways. And that would be really fun for me. I loved the adventure of that. I loved the cast. I loved Damon. I mean, that would be fascinating to me if they chose to do that,” Mitchell told ET of a possible reboot. “It would be so interesting to think about what all those characters would be in someone else’s hands. That is also really interesting to me.”

But in order to do that, Mitchell thinks there would have to be an all new cast. And she isn’t opposed to a reunion either, telling ET she’d love to hang out with the cast “anytime.”

“I’m up for getting together with those people anytime,” she shared. “It’s some really beautiful years of my life, and I never got to hang out with them as much as I wanted to, because I had a young child. So, I’m up for a party. That’d be great.”

“I would just hope for a beautiful Hawaiian night and all of us together. And Terry playing the guitar, and Josh singing. And I’ll put in a little harmony, and that would be fantastic for me,” she added. “To sit around a fire and talk to all of those people, and to have our crew with us, all of whom I loved so much, would be such a gift. That would be fun for me.”

While she said there hasn’t been any conversations about getting the Lost cast together for a reunion or reboot, she’s satisfied with how the series ended, even if it meant that (spoiler alert) all the islanders were dead all along — having died after the plane crash — meaning their time on the island was all a figment of the creator’s imagination.

“I think Damon and Carlton were so happy, rightly, with the way that they were able to tell their story. The way they were able to have a beginning, and a middle, and an end. There’s something about that that’s really pretty magical,” Mitchell explained. “It didn’t go on longer than it should have. And it ended way quicker than I think most of us wished that it had, me included. It would have been lovely to continue to explore Juliet, but I think it had its own little bit of perfection with the way that it did.”

In 2019, Lost creator Damon Lindelof addressed reboot rumors, telling ET that he wouldn’t personally be involved in other versions of the beloved series, echoing Mitchell’s sentiment that the show’s ending concluded exactly as it should have.

“I, personally, am not going to be involved with other versions of Lost, because we told the most complete version,” Lindelof clarified. “I feel like I spent four years of my life begging them to end it and when they finally said yes, the ending that we did probably should stand as our ending.”

The executive producer continued, “That said, I know that it is inevitable that someone else is going to come along and say, ‘I have a new idea for Lost,’ and I’m kind of excited about it and very curious about it. I think that would be sort of immensely flattering and super exciting to see what someone else would do with it.”

You can catch Mitchell when Season 2 of Outer Banks premieres July 30 on Netflix.