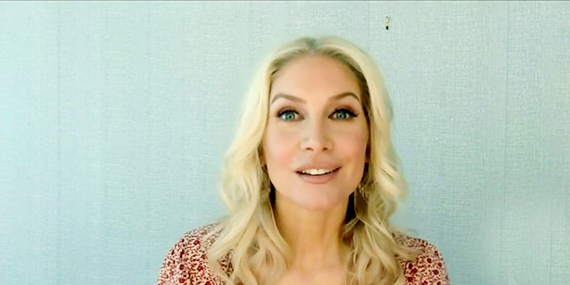 EW has just released the interview with Liz where she talks about Carla Limbrey, her role in OUTER BANKS.

“Playing an entitled, white, rich woman, and so blatantly so, was really of interest to me. I wanted to explore what that looked like,” the actor tells EW of joining season 2 as Carla Limbrey.

Putting herself in someone else’s perspective, someone like Limbrey — a woman privileged in money and access, but suffering from a terminal illness — was a thrilling process for Mitchell. “It’s kind of fun to put yourself in that position to see exactly what you would do,” she says. “What would you do if you had all that money and power in the world and you were, you know… not well. She thinks she’s something that she’s not. And I’ve always enjoyed characters like that.”

Below, Mitchell talks with EW about what else fans can expect from her new villain in Outer Banks season 2.

ELIZABETH MITCHELL: She thinks she’s powerful and enticing and all of those things, and that’s really not what she is. I enjoyed her lack of self-awareness. That was really fun for me. But I found her challenging for sure. She was hard for me to love. But I found my way.

ENTERTAINMENT WEEKLY: Actors always say that they can’t judge the characters they play, even the evil ones, but it’s kind of hard not to judge Carla for what she’s going to do to the Pogues. Do you consider her a villain?

Although I definitely viewed her as an antagonist and a cautionary tale as to where we can go with hubris in our own lives. I know that she would never see herself that way. But I do! And I had no problem having her be a bad guy… With her money and with her power, she’d always simply been accepted as who she is, especially in the South. I’m from Texas, and we like our eccentric people. So that’s just Carla; she’s just like that. It’s an interesting way of thinking about it.

ENTERTAINMENT WEEKLY: Did you watch the first season before you joined the cast for season 2?

ELIZABETH MITCHELL: I don’t know why I didn’t watch it, because it’s totally right up my alley. I mean, I love all those teenage, happy, sunshine, wonderful things. They’re such a joy to watch; they’re such a nice escape. So before the audition, I didn’t know anything about it, and I always do my research before, so I sat down with the first episode. And then probably halfway through the second I was beyond hooked. I sat with my boyfriend and then he had to go back to work or something and then I ended up watching all of it. I watched everything back-to-back, I did not stop. I did not leave that couch. And I was captivated. And then, of course, I was nervous! So maybe it was a bad idea. [Laughs] We did the audition a few days later, and I remember saying, “Oh God, that’s never going to work.”

ENTERTAINMENT WEEKLY:What kinds of conversations did you have with the showrunners about how to play this new antagonist?

ELIZABETH MITCHELL: I had strong ideas based on how they came up with her. I mean, she was a feeling before she was a person. She was that feeling of deteriorating wealth, that feeling of deteriorating grace. I loved that idea of a frayed human, of a person who has been brought up in a way where she has learned all of these things and then none of those things really apply to where she is. And I thought that was really interesting. And then the other thing that I liked was the mortality of it all, that feeling of what would you do to save your own life? What value do you place on yourself? [The showrunners’] history of her kind of came from a feeling that they had in an old house where they were once, and I liked the dirty desperation that felt like an old frayed piece of lace. That was my odd little thing that I took with me in playing her.

ENTERTAINMENT WEEKLY: It sounds like she is maybe the most dangerous force the Pogues have ever gone up against, because as you said, she’ll do anything to save herself.

ELIZABETH MITCHELL: She’ll do anything to save herself and she doesn’t have anything to lose. She’s not healthy; she’s not able to physically be a problem. But mentally, what she’s willing to do is pretty, pretty vicious. And I find that to be really scary. [Laughs] I wouldn’t go up against her for sure.

ENTERTAINMENT WEEKLY: How did you go about bringing her to life physically, since her terminal illness plays such a big part of her overall motivations and actions?

ELIZABETH MITCHELL: I found it to be kind of a wonderful thing. Her way of moving is dictated by what she can and can’t move; her frustration with that is palpable. After a day of using those really beautiful crutches — man, our props department is extraordinary — your body is all bent. You are not feeling well. And feeling unwell, feeling hurt, feeling less, that makes you angry, right? It makes you frustrated. It gives you a little bit of that desperation, just naturally. So the physical part actually really helped me find her. And then I also found her through what she was willing to do, and what she thought of other people, which is not much. I found it very predator-like. It’s almost like she saw herself as the top and then everyone else was not nearly as interesting. And that in itself was a fascinating thing for me because I certainly don’t walk that way through my own life.

ELIZABETH MITCHELL: [Laughs] I know, it’d be terrible if I was like, “Yeah, I really identify with her!”

ENTERTAINMENT WEEKLY: When we meet her, she’s clearly suffering from a terminal illness that impacts her physically. Are you able to say what that illness is?

ELIZABETH MITCHELL: I’m going to try not to talk about it, but we did figure out what it was and what each one of her ailments were so that I could have that in my mind and body when we did the work. And they were pretty specific about it. It’s fairly brutal. She’s not long for this world, for sure.

ENTERTAINMENT WEEKLY: What do you think is going to surprise people about where Carla’s arc goes this season?

ELIZABETH MITCHELL: I think it will surprise viewers who she ends up being connected to, what she’s willing to do, who she’s willing to hurt to get what she wants. I mean, they were to me in the reading of it, because I just went episode by episode.

ENTERTAINMENT WEEKLY: You’re no stranger to filming in gorgeous tropical locations after Lost—

ELIZABETH MITCHELL: And with beautiful people!

ENTERTAINMENT WEEKLY: So how did shooting Outer Banks compare to your time on Lost?

ELIZABETH MITCHELL: It was amazing, I loved being [back in that environment]. Every time I get to go back to the beach I’m always so thrilled. [Laughs] And I’m such a pale little creature, so I’d wake up early in the morning and walk on the beach and go out late at night and walk on the beach. I find that being surrounded by beauty does some pretty great things to your state of mind. There was some tremendous emotional satisfaction from filming and watching this season.

I love how Liz pushed herself into this kind of role. I think she did something truly brave.  Knowing her personality, and her moral code, this role is such an amount of immense work for her. And I literally know how much she put in all the process to create her. I am so proud of Liz for this. My heart smiled for this: “She was hard for me to love. But I found my way.”
I always feel the same with bad guys. I look at their story, their flaws, their pain, their actions and I try to find a way to understand them, to have hopes for them, I might even root for them (it depends)y, and there is always a part of me who is able to truly love them. I live the journey with them, even with no redemption, I enjoy to see their path. I look at their way of seeing themselves. I happened to learn a lot from them. In a matter of compassion they enrich me.
What Liz said is so interesting to me.
I love the psychological aspect of putting herself first. It’s just the opposite of what her previous characters were. I think for an actress is a way to challenge yourself, to put yourself out of your comfort zone, a way to discover more things about human nature. So fascinating to me.
I love that Carla is not aware of who she is and she sees herself as powerful even in her condition. How blind can she be? It’s bitter irony if you think about it. She is powerful with her mind, with her willingness to do everything that takes. But pain, psychological pain puts you in a condition of loss.
When I watch shows/movies or read books about ordinary people in extreme situations, what I find appealing is what they are willing to do to save themselves. Are they able to compromise their values? Or simply they don’t have the moral code and you see the worst of human nature in their actions. I always ask myself what would I do in that situation? So my journey with Carla Limbrey will be based on this I think.

Quoting Liz because this line is pure art: “she was a feeling before she was a person.”

I feel the same about her.