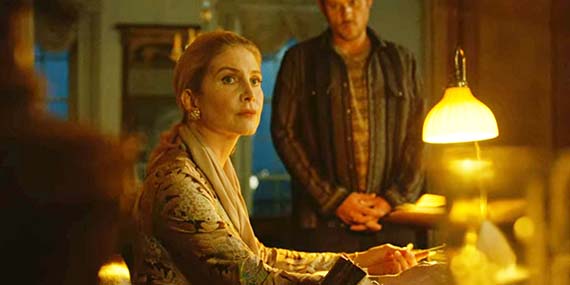 I’m still very in awe of Liz’s performance in Outer Banks season 2. I found these reviews by tvfanatic about Liz and her character in Outer Banks.

I love what they wrote there about Limbrey, and I agree that I want to see her team up with the Pogues, which will give Liz the chance to interact more with the rest of the cast. It would be so interesting to see how that might change her.

Carla Limbrey was even more than I expected, but what surprised me the most was actually Liz’s performance. I am in love with the way she built the character, of the way she made her physically sick, of how she dug in the dry soul of this woman, of the way she was able to capture that darkness and expose it on the surface. I am captivated by the research in the dead end alleys of a mind destroyed by a terrible disease and a heart deprived by love.
Elizabeth is incredible and I’m every day more proud of her.
I cannot wait to know what is going to happen next, especially for the big plot twist that happened in the last moment of the finale. I can’t wait to explore that relationship in season 3 and I want a cure for Carla. I know she is bitter and mean, like an old lady from a horror movie, but she is also fragile both physically and emotionally. I saw a potential light in her that would be interesting to let it shine.

Liz made her in a way you feel the need to empathize with her, but at the same time you know she is mean and sometimes terrifying. I cannot help but love her. I understand why she is like this and I cannot hate her. I think she deserves love and she needs to learn how to give some as well. I believe she hasn’t got any. Probably not much compassion and can make you.

Outer Banks is the number 1 show on Netflix in more than 40 Countries, including the US and actually also in my Country, which makes me very happy. People are watching Liz. That is always so exciting to me.

I also noticed that you are posting your comments in the discussion post, I’m going to read you all.

And if you missed them, in the last couple of days I posted several interviews about Outer Banks and also First Kill.

Elizabeth Mitchell turned in an ice-cold performance as Carla Limbrey, someone who clearly has archaic views on the world.

Much like Ward she likes to have power and influence, but the difference between the two of them is that she is not willing to put on a mask.

She can be her authentic self no matter the situation, and that was flawlessly highlighted when she attempted to kidnap Pope as his friends waited outside.

Carla’s quest for the gold has clearly been going on for decades, and now she’s at the point in which she has nothing to lose.

Those types of characters are fascinating to me because it makes the events unpredictable.

Whether she will get her hands on the key, I don’t know, but it was a compelling hook as we approach the midway point of Outer Banks Season 2.

Then there’s Limbrey. She was wicked, but I somehow felt sorry for her when she realized bugs had eaten the fabric she needed to heal herself supposedly.

She was visibly defeated, and her brother-in-law trying to ditch her showed how far she would go to be in control of everything.

Her journey seemed over when Rafe stole the cross, but on this show, there’s no telling who’s lurking around the corner to dole out some revenge.

That’s why the season finale is going to be so fun. I have no clue how it will play out, and that’s all part of the fun.

The only positive aspect of this is that it gives Limbrey a reason to come back, and if she’s teaming up with the Pogues this time, it will be more exciting.

Limbrey is unpredictable, but having her on the heroes’ side will make them even more deadly than before. Limbrey is smarter than the teenagers because she knows how far she’s willing to go as a person.