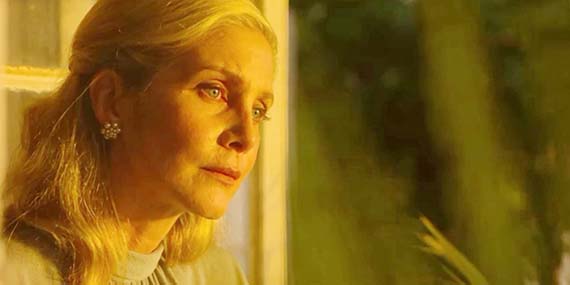 I found these interviews with Josh Pate and Shannon Burke (one of the showrunners and EP of the show) where they talk about the shocking finale involving Liz’s character.

Josh Pate adds: “We started to get excited about what we could do in a potential Season 3 if he were back.”

Viewers learn about Big John’s existence when Carla Limbrey, the series’ new villain played by Lost alum Elizabeth Mitchell, arrives in Barbados with a letter bearing the Royal Merchant insignia. She goes to a home where a man informs her that “he” isn’t doing well. And when we find out who the “he” in question is, it’s John B’s presumed-dead father, played by Constantine‘s Charles Halford.

Their conversation is about the shroud that she hoped to find in the Cross of Santo Domingo, the ancient cloth that allegedly has healing powers. (Maybe that’s how Big John survived his injuries from Ward’s attack?) “I can help you,” he tells her. “But you have to help my son.”

So is Limbrey and Routledge Sr.’s interaction leading to a potential enemy-of-my-gold-hungry-enemy-is-my-friend situation? The pair have worked together before, Jonas Pate points out. And they both clearly hate Ward Cameron. “It’s laid in there. There are a few mentions throughout the season about Limbrey. Like, Limbrey has been aligned with Big John in the past, so it’s definitely a likely way we will go,” he says, quickly adding that he and the other EPs don’t have a detailed “master plan” for Season 3 yet.

However, “The treasure-hunt aspect of the show is something that we see as important and integral to the show,” Josh Pate explains. And bringing him back, we realized maybe there was a way to [combine] these different treasures that they’re going after into a larger mythology.”

He adds: “We thought that Big John’s return would be a way we could excavate some of that.”

What they don’t know, however, is their season 2 nemesis Carla Limbrey (Elizabeth Mitchell) is busy making moves in Barbados, connecting with none other than John B’s presumed-dead father Big John (Charles Halford) who is most definitely not dead despite what everyone has thought this entire time. Apparently, Big John wrote to Limbrey and summoned her to where he’s been hiding out in Barbados, offering to help her find the magic healing ancient shroud she’s looking for (which was not in the cross like she thought). But he’ll only help her if she helps his son — John B. Will the Pogue’s nemesis become their greatest ally? Now that’s a juicy twist to keep fans guessing until Netflix renews Outer Banks for season 3.

SHANNON BURKE: There was even a thought at some point, remember this guys? In episode two or three or four of this second season, we thought about having Big John appear then with Limbrey.

MEANWHILE, IN BARBADOS | The teens make it to a deserted beach, which JJ christens “Poguelandia.” They start a bonfire and party, because Pogues gotta Pogue. Back on the Outer Banks, Kiara’s family hangs “Missing” posters with her face on them, Pope’s dad is sad, Topper finds the Cameron home empty and the new sheriff gives a press conference.

BUT WAIT. Then we move to Barbados, where Carla Limbrey (almost forgot about her, right?) gets out of a cab and brandishes an envelope with the Royal Merchant emblem on it. “How is he?” she asks a man at a shack. “Half dead for a long time,” the man replies, but brings her in anyway.

“You wrote to me about the shroud,” she says to someone off-camera. “I know where it is,” a man replies. “I can help you.” Wait a minute… it can’t be… But as the camera turns to him, IT IS! “But you have to help my son,” Big John Routledge says.

I think it means a lot the fact that Carla asks how Big John is. She seems to care and this is the first time we see that in her.