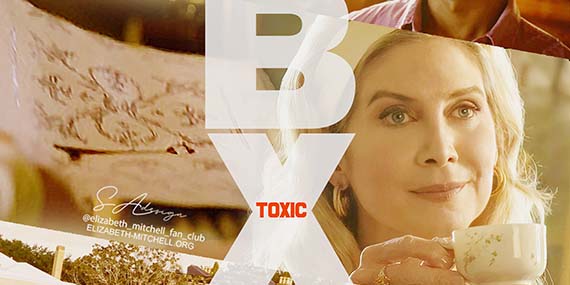 I found these two articls about Carla. They are not reviews, simply a recap of who she is and speculation about season 3.

The Pogues are back! Outer Banks season 2 just dropped on Netflix and, in natural OBX fashion, the plot twists seem to never end. Seriously — who knew a treasure hunt could be this chaotic? This season also gave fans an introduction to a few new characters, including Carla Limbrey, who will do anything to get what she wants.

After that super intense season finale, I’m sure you’re wondering who Limbrey is and how she knows John B’s dad, Big John. Here’s everything we know about Limbrey and her motives.

Limbrey is played by 51-year-old actress Elizabeth Mitchell. You might recognize her as Juliet on ABC’s Lost, or even as the snow queen on the fantasy series Once Upon A Time. Elizabeth has also been on the silver screen in films like The Santa Clause and The Purge: Election Year.
She stirs the pot in season 2

Viewers are introduced to Limbrey when Pope receives a mysterious letter from her. In the letter, she claims she can clear John B’s name after he was mistakenly arrested for shooting Sheriff Peterkin. Of course, this prompted Pope to go see what’s up with Limbrey. During his visit, she said she needed a key that she believed he had, but Pope knew nothing of the key (that is, until his Me-Maw tells him everything).

The key actually unlocks the golden cross of Santo Domingo, where a shroud is hidden. Limbrey believed that the shroud can cure her illness, and she was willing to do anything to get her hands on it. No, seriously. She killed her right-hand man while trying to retrieve it.

How does she know Big John?

After it seemed like Rafe Cameron left Limbrey for dead after a shooting, she actually showed up in Barbados in one of the final scenes of season 2.

This is when fans found out that Big John sent her a letter with the wheat symbol that’s tied to the shroud. And, yes, Big John — a.k.a John B’s dad that everyone thought had died — has actually been alive for a while. But how does Limbrey know him?

Big John’s research took up a ton of his time, so it’s likely that he came across other people who were on the same mission to find the Royal Merchant shipwreck. That includes Limbrey, who also could have been tied to the people who kept Big John hidden.

As you can imagine, season 3 of Outer Banks will most likely dive deeper into their dynamic and how it affects the Pogues’ search.

Outer Banks season 2 introduces fans to a handful of new characters, but none more terrifying than the extremely toxic, obscenely rich, and high-key chilling Limbrey, played by Elizabeth Mitchell.

Carla Limbrey is introduced in season 2, episode 3, with viewers finally meeting the ominous figure in episode 4, when Pope (Jonathan Daviss) is summoned to her home.

After a few episodes, we find out that Limbrey and her family have very deep connections to the Royal Merchant, the gold and Denmark Tanny. As the season goes on, we find out exactly why she’s so interested in Pope, and why she’s so desperate to get her hands on the treasure.

Limbrey also has ties to both Ward Cameron and John B’s dad, Big John Routledge – but what exactly are they and how far back do they go?
WARNING: Major spoilers about Outer Banks season 2 and Limbrey’s storyline below!
Who are the Limbrey family?

The Limbrey family are one of the most powerful and wealthiest families in Charleston. As JJ puts it, “they make our Kooks look like Pogues.”

Herman Limbrey was the captain of the Royal Merchant. The family are also linked to Denmark Tanny, and were responsible for the murder of Tanny’s wife Cecilia, and his daughters. They later killed Tanny for burying his wife’s body.
Who is Carla Limbrey?

“C. Limbrey” is first mentioned in episode 3, when Pope receives a letter with the same wheat symbol as what is on the gold from the Royal Merchant.

Carla Limbrey is a relative of Captain Herman Limbrey, and believes that the treasure on board the Royal Merchant belongs to her family.

Just like Big John Routledge and Ward Cameron, Limbrey has been searching for the gold from the Royal Merchant. She and Ward were partners in the search, and also have a “long and tortured history” as she funded his first development project. Limbrey tells Pope that Ward ultimately “crossed” her too.
In episode 4, when Pope visits her house in Charleston, we find out that Limbrey is not actually chasing the Royal Merchant gold. She’s now looking for the Cross of Santo Domingo, a huge golden cross encrusted with jewels that contains an ancient holy relic – a garment that is “capable of healing the sick from any malady”.

Limbrey is desperate to get her hands on it because she is dying and she believes that the garment will heal her.

She enlists Pope to find the key because she believes he is a descendant of Denmark Tanny and that the key is somewhere in Pope’s family. She’s right, and eventually, she ends up in possession of the key.

After getting the key and finding the Cross, Limbrey fails in her mission to locate the garment as it is not hidden within the Cross as Tanny suggested. She also loses the actual Cross to the Cameron family.

But season two’s shock twist ending reveals that Limbrey’s hopes for finding the holy garment might not be over yet.

Who plays Limbrey in Outer Banks?

Elizabeth Mitchell has also had major TV roles in V, Revolution, Dead of Summer and ER. Elsewhere on screen, you may recognise her from her role as Carol, a.k.a. Mrs Clause, in The Santa Clause movies, The Purge: Election Year and Gia, opposite Angelina Jolie.

Outer Banks Has A New Villain And She’s Scary AF

Things just keep getting wilder for the Outer Banks crew. In Season 1, the Pogues had to deal with a ton of enemies: Ward, a bunch of entitled Kooks, and the intense drug dealer, Barry, among others. The teens couldn’t even trust their local police department to not be in the pockets of Ward. But Season 2 of the Netflix drama introduces maybe the scariest villain of them all, and she’s not one to be messed with. So, who exactly is Carla Limbrey on Outer Banks, and why is she so fixated on Pope?

Spoiler alert: This post contains spoilers from Outer Banks Seasons 1 and 2. In the Season 1 finale, viewers watched as Pope (Jonathan Daviss) lost his scholarship because he chose to walk out of his interview, telling the scholarship committee he had to help his fellow Pogues get the Royal Merchant gold. At the time, no one seemed to take him seriously, but fast-forward to Season 2, Episode 3, and Pope was contacted by a mysterious donor who claimed she is somehow connected to the Royal Merchant. The woman was Carla Limbrey, who is played by none other than Elizabeth Mitchell. Viewers will recognize her from a ton of popular shows including Lost and Once Upon A Time, but Outer Banks just may be her most fascinating project yet. (?_? lol nope! NBM)

When, Pope stole his father’s truck and drove to Charleston with JJ and Kie to meet Limbrey, he had no idea what he was in for. At Limbrey’s mansion, Pope met Limbrey (and her sleazy half-brother, Renfield). Limbrey told Pope she too had been wronged by Ward and has evidence that will exonerate John B. — who was still on the run with Sarah at the time, But there’s a catch: Before she would help the Pogues, Limbrey demanded that Pope give her Denmark Tanney’s key.

Tanney is a familiar name from last season. John B. figured out he was a former slave and the only person who managed to escape the Royal Merchant shipwreck alive. Tanney bought his freedom with the gold from the ship and hid it somewhere before he was tragically lynched. But even with all this knowledge, Pope had no clue what Limbrey is talking about; he especially didn’t understand why Limbrey would expect Pope to have anything that belonged to Tanney, let alone some random key. Sensing bad vibes, Pope managed to escape the mansion, despite Ren’s attempt to kidnap him. But before he left, Limbrey said something interesting: “The key leads to the Cross of San Domingo. The real treasure lies at the foot of the angel.”

After further research, Pope realized Limbrey may have been onto something and that there’s possibly even a more valuable treasure than the gold. It was eventually revealed that inside of the cross Limbrey desperately covets is a mythical garment that is supposed to cure diseases and illnesses. And because Limbrey is sick and will soon die from her disease (although the show never specifies what the disease actually is), she will do literally anything to get her hands on the garment — even murder.

As for the connection to Pope’s family? Well, after talking to his Meemaw, Pope learned Denmark Tanney is his ancestor. Not only does the discovery shock Pope, but it also puts him on a mission to protect Denmark’s key and the cross rather than hand it over to Limbrey. What ensues is an intense battle between the Pogues and Limbrey, who eventually teams up with Rafe, over the Cross of Santo Domingo. By the end of Season 2, all parties involved (minus Ren, IYKYK) are still very interested in the Cross, meaning fans should expect Carla to return should Outer Banks get picked up for a third season.