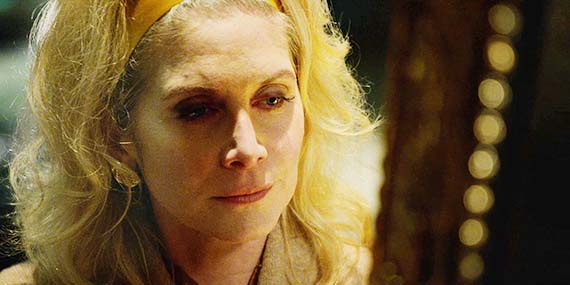 I read a few interesting articles about the shroud.
Funny I didn’t think about that before this article popped up.
The shroud from Outer Banks could be inspired by the Shroud of Turin (called La Sindone in Italy).
Could Outer Banks be more supernatural? What do you think? I’d love to have Carla Limbrey saved on one hand, although I think it would be interesting to see if this shroud doesn’t work. We would get an amazing performance by Liz, even if it would be so cruel but the repercussions on Carla would be interesting to watch. Because what happens if everything she believed in isn’t real? She keeps fighting against terrible pain and a terminal illness because of the hopes that she has. If she loses them, how would she react? I am intrigued by this idea. What if instead of becoming a worse person she becomes a better person. I mean looking for something for so long, being focused only on that, could have made Carla the person she is now.
Of course most of her darkness is due to the disease and the horrible physical pain that she must feel (also her wrong education) but I am pretty sure that being obsessed about something doesn’t help your mental state. So if all her beliefs fall down, what if she realizes how wrong she was by being so focused on something which wasn’t even real? What if she realizes how that impacted her life and didn’t allow to actually live. She is fighting to live, but she has nobody, she is alone. No love, no family, no friends. Why fight so much to survive if you don’t have any of these? So I was thinking, what if she realizes her mistakes? What if this realization will soften her? What if this is a path for redemption?

I also added a clip from the toofab interview about what Liz would love to see… ahhhh the redemption. Me with every single villain. HAHA!

After losing the Royal Merchant gold to Ward Cameron in Outer Banks Season 1, the Pogues find themselves hunting down another artifact in Season 2. When Pope is mysteriously contacted by the wealthy Carla Limbrey, she accosts him at her home in an attempt to retrieve a key left behind by freedman Denmark Tanny, who Pope later learns he’s related to. The key leads to the Cross of Santo Domingo, which Limbrey believes contains something she calls “the shroud” — a mystical cloth she thinks can heal her mysterious terminal illness.

Though both the Royal Merchant gold and the cross are fictional, it’s likely that Outer Banks based the shroud on a real relic called The Shroud of Turin. Depending on who you ask, The Shroud of Turin (called La Sindone in Italy) is either an actual Christian artifact or a very clever medieval forgery. It’s a 14-foot, yellowed linen cloth that appears to bear an image of a crucified man. Some believe it’s the robe that Jesus Christ was buried in, while others think it’s just a religious icon that has manifested the image of Jesus on its surface.

The first mentions of the Shroud of Turin appeared in France during the 1350s. Per History.com, a French knight named Geoffroi de Charny allegedly presented it to the dean of the church in Lirey, France as Jesus Christ’s burial robe. But there is no record of how Charny got his hands on the shroud or why it would be in France when Jesus was likely buried outside of Jerusalem.

Per a 1981 New York Times article, there were numerous claims of religious relics during the Middle Ages in Europe. As a result, the authenticity of the shroud has been debated for decades, starting from the moment it was discovered. In 1357, the Bishop of Troyes, France proclaimed it was a forgery, with his successors saying he believed the cloth “had been cunningly painted” and was more “a work of human skill” rather than a miraculous artifact. If it was in fact painted by an artist, that person would have singlehandedly changed the way Jesus is depicted today. As Duke professor Dr. Alan B. Whanger told New York Times in 1982, Jesus was initially drawn without a beard to resemble Greek gods. But because of the shroud’s image, he’s now typically depicted as a tall, thin man with long hair, a beard, and deep-set eyes.

The Pope appointed a team of experts to study the shroud in 1969, and in the 1980s, it was pored over by countless scientific teams. Finally, in 1988 the Roman Catholic Church announced it was not the authentic cloth that Jesus Christ was buried in, as the linen was radiocarbon dated back to the Middle Ages. But the church didn’t discourage the belief that the shroud still somehow manifested an image of Jesus Christ, and thus is capable of performing healing miracles.

That should have been the end of the discussion, but debate continues to this day about its authenticity. In 2013, scientists in Italy used infrared light and spectroscopy to date the shroud between 280 B.C.E. and 220 C.E., which is much closer to when Jesus supposedly died. Per CNN, a member of the 1988 radiocarbon dating team said in December 2013 that he was willing to retest the shroud. And in 2018, a forensic scientist found that the shroud could not be authentic, as the blood patterns on the material are not consistent with how a crucified body would bleed.

Today, the Shroud of Turin is housed in the Duomo of Torino in a climate-controlled case in a chapel built just to hold it. Because it’s extremely fragile, it’s not viewable to the public except during very rare exhibitions (the last of which was in 2015). Still, the belief that the shroud is holy and can heal serious ailments (or even demonic possession) persists. We’ll have to see if Outer Banks leans more into that supernatural angle, or if Big John is just sending Carla Limbrey out on a wild goose chase for a fake in order to save John B’s life.

So far, Outer Banks has been grounded in reality. But any fan of Indiana Jones will tell you that the best treasure hunting stories usually cross over into the supernatural or paranormal. What if the mythical cloth that Limbrey is searching for actually works? The characters have miraculously survived death several times over, so it’s not that far-fetched that the show could get really weird in Season 3.

Spoilers ahead for Outer Banks Season 2. Since the beginning of Outer Banks, John B has been led to believe that his father, Big John, is dead. His disappearance nine months before the start of the show is what set off the Pogues’ hunt for the Royal Merchant’s gold, and though John B initially believed his dad was still out there somewhere, he learned throughout the course of Season 1 that Ward attacked Big John and threw him overboard, leaving him for dead. Unbeknownst to Ward, Big John survived and washed up on a nearby island, but it was implied that he eventually succumbed to his injuries after inscribing the clue of “Redfield” for John B on a compass. Season 2 reveals a different story.

In the final moments of the season, Carla Limbrey goes to Bridgeport, Barbados to meet a mysterious figure…who turns out to be a very much still alive Big John. It’s unclear how Big John knows Limbrey — other than that they both individually worked with and were betrayed by Ward — but he tells her that he knows where to find the mythical “shroud” Limbrey believes will heal her physical disability. He says he’ll tell her where it is, but first, she has to help John B — who, by the end of the season, is marooned on an island in the Caribbean with the rest of the Pogues.

Series creators Josh Pate, Jonah Pate, and Shannon Burke tell Bustle that bringing back Big John was always a card they knew they could play, but that, “It was kind of a question of, well, are we going to go there? And if we do, when would we do it?” Josh explains. While writing Season 2, they realized it would be a great cliffhanger and got excited about “all the doors it opened up for father-son stories” in future seasons, Burke adds.

Viewers may recall that in Season 1, Scooter Grubbs seemingly found Big John’s remains on the island he washed up on. The team says that there aren’t any obvious clues that this was a misdirect — or any other Easter eggs that Big John was alive — but they “[do have] an answer” to how he survived that will be explained in Season 3. Jonah adds that Big John’s connection to Limbrey will also be revealed in Season 3, should the show be renewed. And now that we know Big John is alive, the significance of the Royal Merchant gold and the Cross of Santo Domingo will “tie into an even bigger mythology,” Josh teases.

With Limbrey’s search for the shroud, it seems like Outer Banks is starting to potentially lean into a more supernatural direction, a la Indiana Jones and Tomb Raider. “[Outer Banks’ mythology] is a big onion and we just keep rolling through the layers,” Jonah says. “We’re just a couple of layers in.”