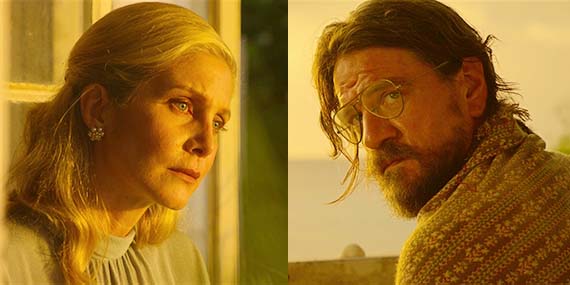 I found a few interesting articles about Carla and her connection to Big John. I am excited for this because it means more of Liz in season 3. In season 2 we had the introduction of this character, whose only goal was to find a cure for her illness, but she wasn’t connected to any of the main characters and we didn’t get to see her interact with them a lot, but the last scene in Barbados with Big John threw a whole new prospect, which got me me very eager for season 3.

What is obvious is that Carla and Big John knew each other from before and she knew he was alive, since she wasn’t surprised to see him and asked how he was doing. The first time that she showed interest in someone rather than her own health.

C. Limbrey became one of Outer Banks’ new villains in season 2, but she actually has a deeper connection to Big John that will play out in season 3.

Netflix’s Outer Banks season 2 ended with a cliffhanger revelation that Big John has not only been alive but also communicating with C. Limbrey, which begs the question of how they connect to one another. The second season takes John B and the Pogues on an adventure to find the Cross of Santo Domingo, another hidden treasure of Denmark Tanny from the Royal Merchant. As Pope discovers his true heritage, Outer Banks introduces Carla Limbrey and her half-brother, a wealthy Charleston native who has been searching for the Royal Merchant and even funded Ward’s first research expedition.

Outer Banks season 1 picked up nine months after Big John had been missing at sea. He was searching for the sunken treasure of the Royal Merchant at the time of his disappearance, which was later revealed to have been a journey taken with Ward Cameron. The men got into a scuffle over the compensation for their contributions, leading to Ward believing he killed Big John and dumping his body into the water. Lara Grubbs told John B that his father died after making his way to a beach, likely starving under the sun’s heat. John B came to terms with his father’s death, only for Outer Banks season 2 to end with Limbrey arriving in Barbados to meet an alive Big John.

When Limbrey describes her connection to the Royal Merchant as Pope visits her Charleston home, she mostly sticks to how she was a former partner of Ward before he teamed up with Big John. She knows the details of Ward killing Gavin and Sheriff Peterkin because she had a phone call recorded to prove it all, which means she was much more connected to the Outer Banks characters’ search than suggested. After Ward screwed over Limbrey in their search, she likely introduced a silent partnership between herself and Big John, who she knew had much more knowledge on the ship’s history.

In Outer Banks season 2’s final scene, Big John had sent Limbrey a letter requesting her to visit him, which led to a conversation between the two suggesting their Royal Merchant research was much more intertwined than just an extended connection by Ward. Big John knows that Carla wants the holy garment of the Cross of Santo Domingo, which never seemed to be in his forefront since John B’s original journey was only to find the $400 million in gold. Limbrey had no interest in the gold, so it’s possible after Ward double-crossed both, they worked together to find the treasures each one desired.

With Big John back and alive in Outer Banks season 3, the drama will pick up between the Limbreys, the Pogues, and Big John himself. Big John just sent Carla on a mission to help find John B and save him from the deserted beach they’ve landed on, which will eventually lead to a third treasure hunt to find the Cross of Santo Domingo’s holy shroud he promised to lead her to. Since Outer Banks season 2 saw the Pogues, and especially Pope and John B, get into scuffles with the Limbreys, her assistance likely won’t be warmly accepted, even if she claims to have been sent by Big John. Since Big John will have to explain his survival and lack of communication to John B in Outer Banks season 3, the series will likely dive further into the background between his and Carla Limbrey’s partnership.

Holy s#!t, Big John is alive! So, how about that finale? It’s safe to say that when the mysterious person Carla Limbrey was seeking out in Barbados turned out to be none other than John B’s supposedly dead father, viewers were beside themselves. We learn that Big John reached out to Carla via letter, and the envelope just so happened to have the mysterious wheat stamp on the back of it. Which leads to a million other questions, of course.

As for Carla Limbrey, her days are numbered due to her terminal illness. She spent the season chasing down the Cross of Santo Domingo in search of a relic that would supposedly cure her — the shroud. Once she got her hands on the cross, she was devastated that the item she was looking for was nowhere to be found. Which led her to Big John, who wrote to her about the shroud. He knows where it is. But if she wants to get her hands on it, she needs to help John B.

It remains to be seen what exactly Big John knows about his son’s exploits and how he wants Carla to help him. This would likely be a large, ongoing plot in season 3 that could end in John B finding out his dad is alive sometime near the finale. Could this lead to a team up against Ward (with Carla’s financial backing for resources) to finally get the gold and the cross back?

The big reveal in the season 2 finale is that John B’s dad, Big John, is actually alive! He went missing nine months before the start of the series and was believed to be dead after Ward Cameron double-crossed him and left him for dead off a remote island. Now we know he survived the ordeal, and has possibly been plotting his revenge the entire time. He reached out to Carla Limbrey, after she failed to secure the miracle relic she was looking for inside of the gold cross.

Big John offers to help Carla get what she wants in exchange for her helping John B. Carla has an unknown degenerative disease, and doesn’t have long to live, which is why she’s desperate to find a cloth she believes can heal her ails. With her bastard half-brother Renfield dead, and no other apparent heirs, she has an entire estate at her disposal, and those resources could prove useful to the Routledges.

The Camerons have been accumulating wins, but each of them at a cost. They’ve lied, stolen, and killed to get what they want, and they’ve made a lot of enemies along the way. Ward crossed Big John and Carla Limbrey, among others, and it’s only a matter of time before the people he’s wronged seek vengeance.