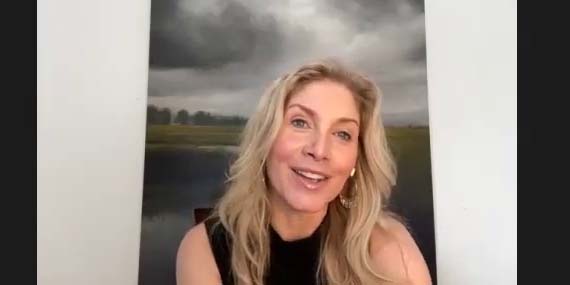 There is a brand new lovely video interview with Liz about Witch Hunt, Lost, OBX, When Time Got Louder.

Shows get so lucky when Liz joins the projects. She makes everything brilliant.

(CBS Local)- Elizabeth Mitchell has been a household name in Hollywood for years and one of the main reasons is that she loves taking on roles that scare her and challenge her. The actor best known for playing Dr. Juliet Burke in the hit series “Lost” recently appeared in season two of the Netflix series “Outer Banks” as Carla Limbrey and has a new movie coming out Friday, October 1 called “Witch Hunt.”

CBS Local’s DJ Sixsmith recently spoke with Mitchell about her career in Hollywood, her knack for joining TV shows that are already hits and her memories of filming “Lost” in Hawaii and why she was fascinated by the many different layers of her character Juliet.

“I seem to hop onto really great shows after they become great,” said Mitchell. “The joy of that is they have their voice and I just get to come in and play and the weight of it is not on my shoulders. It’s a position I love to be in and I love joining wonderful things. I genuinely can’t mess it up because I’m not the thing making it great in the first place. That is something as an actor that I can do again and again and again. I get to come in and do weird, odd stuff and it doesn’t really matter because I’m not going to affect the show. I like playing someone I’m a little bit afraid of.”

Mitchell says that her “Outer Banks” character Limbrey is not a great human and she liked the challenge of figuring out how to play this woman. The actor felt similarly about playing Juliet in “Lost.” It’s been over a decade since the final episode of the series and many shows are still trying to replicate the formula that made the ABC drama a massive success.

“Lost was terrifying because it was such a big show,” said Mitchell. “When I got the audition, I said I’m not going to go do that. Nobody is going to get on Lost. Luckily, I had just had a baby and I had been doing some work on my house and I had just fallen off a ladder and broken my foot and wrist. I was in now way, shape or form ready to take on nerves, so I just went in there to do it. Lost was really a little different because I really did have an understanding of Juliet from the minute I read her. She made sense to me. It’s not always the case and I have to work on a lot of these guys. Lost was entertaining and actor’s dream piece.”