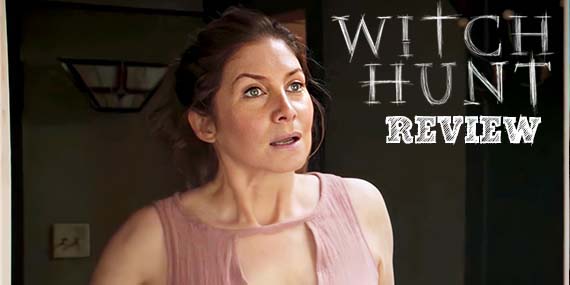 REVIEW: Filmmaker Elle Callahan’s WITCH HUNT embraces themes of Arthur Miller’s “The Crucible,” the underground railroad, “The Diary of Anne Frank,” along with beliefs and issues on the “other” in our zeitgeist to weave this tail of persecution and horror.

Unlike those tales, Callahan’s tale embraces fantastical elements of magic and the supernatural. The film begins with a witch burned at the stake as her daughters watch. They end up in Claire’s home. The narrative focuses on Claire and her thoughts on the plight of the witches, her mother’s aiding them and pending legislation on witches and witchcraft. I appreciated the metaphors and the issues she asked us to consider. Some of the character names and plot devices pay homage to the stories of the Salem Witch Trials as well as few films about witchcraft. Some of her contemporary tests for witch finding, as well as some of the weapons she presents, were interesting. I was a bit disappointed that there were no warlocks, male witches, but I understand how that might not figure into the plot. In terms of the big reveal, I didn’t find it as much of a surprise due to the fact that some elements hint at it. Many of the film’s more subtler moments I found more effective than the bigger special/visual effects. I screened the film with my adolescent daughter, a big consumer of the WB fantasy/supernatural shows. She truly enjoyed WITCH HUNT, especially its more focused, adult themes than the series she watches.

WITCH HUNT features some nice locations and sets. I like the concept of the house with the space between the walls where the witches hide, however it looked like a rather large space. Also, given the light coming in between the wood slats it felt a bit off given the exterior of the house. The film is nicely shot, well edited, and an effect score by Blitz//Berlin. The visual and special effects were nice enhancements to the plot and set the tone for the story.

I enjoyed the performances. Gideon Adlon, Elizabeth Mitchell and Christian Camargo are excellent as the three main characters that drive the tension and drama of the tale. Gideon Adlon plays Claire and wonderfully crafts a complex character at odds with her beliefs and her mother’s actions. The cast easily draws in the viewer and takes us for the ride. They allow the viewer to feel the tension and drama of the story and allow us to be emotionally invested.

WITCH HUNT is a timely tale that is as thought provoking as it is emotionally engaging. It’s nicely written, has strong production values, and is a high end independent film. Elle Callahan does an exceptional job of allowing the story to come through and does not distract the viewer with effects. The story stays focused and keeps the viewer engaged. The performances and direction drive the narrative to deliver a highly entertaining film. I enjoyed Elle Callahan’s work and am eager to see what she delivers next.