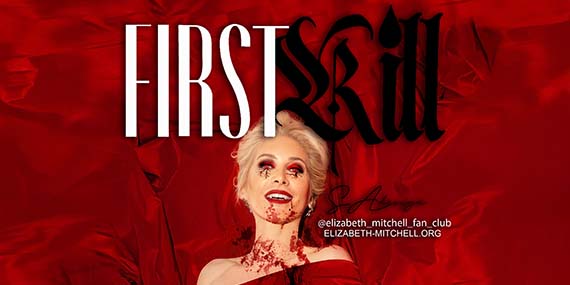 I found a few articles about the best shows coming in 2022 on Netflix including “First Kill” among the list.
I saw Netflix US already announced some titles for February and March (not the full list) and Netflix Brazil listed the show with no date yet. Since they release projects worldwide at the same time, they haven’t decided yet for Liz’s show.
I guess there are more chances to see it released between March and April.

Netflix in 2022: Top 18 Best Sci-Fi TV Series Coming
Are you a fan of sci-fi movies? Let check the list below the list of best shows coming on Netflix this year 2022!

Netflix has given us some of the best sci-fi and fantasy titles over the years. From Stranger Things to The Haunting anthology to The Umbrella Academy, Netflix is working with classy filmmakers to create gorge-worthy content.
List of 18 best fantasy, sci-fi shows coming soon on Netflix in 2022:

When it’s time for teenage vampire Juliette (Sarah Catherine Hook) to make her first kill so she can take her place among a powerful vampire family, she sets her sights on a new girl in town named Calliope (Imani Lewis). But much to Juliette’s surprise, Calliope is a vampire hunter, from a family of celebrated slayers. Both find that the other won’t be so easy to kill and, unfortunately, way too easy to fall for.

7 Exciting Netflix Original Series Coming Out In 2022
Fans of Netflix have plenty to look forward to in 2022 with these upcoming original series.

Even though the year 2022 has yet to come, it’s already clear that the audience can expect many great things from it. Especially if they like streaming new original series on Netflix. The streaming service keeps creating new fascinating content and it has many promising shows coming next year. Some of them already have a date set while others don’t, but unless things change, they all should premiere sometime in 2022.

All fans of fantasy, sci-fi, and horror will be delighted since the most promising upcoming shows all fit in these genres. Netflix will introduce both sequels to well-known works as well as new pieces that haven’t had any movie or TV adaptation before. As such, it can be expected that in 2022, people will be streaming Netflix just as much as they did this year, if not more.

Vampire stories are still a popular genre, partially because there are many ways how the creators can portray the bloodsucking creatures. In this case, the story will focus on two girls who should by all rules be enemies, but something else starts building between them instead.

A young vampire is looking for her first kill and picks up a vampire hunter but instead of fighting, they might fall for each other. Based on V.E. Schwab’s short story, First Kill will most likely mix emotions and action and give space to young heroes, which might attract viewers of the same age.

2022 has some of the most exciting shows lined up for release. Here is a look at the top 8 Netflix shows to watch in 2022:

Vampires will be here to remain on Netflix, as a new series based on the blood-sucking supernatural creatures’ history is due to premiere on the streaming service.

Instead of a prestige drama from Midnight Mass’ Mike Flanagan, the streamer will give subscribers First Kill, a young adult fantasy.

YA novelist V.E. Schwab and scream queen Emma Roberts star in this sapphic teen drama. Schwab will serve as the show’s writer, producer, and executive producer. Roberts will co-produce the series with her closest friend, Karah Priess, through their media firm Belletrist Productions, which has been described as “aiming to celebrate book lovers.”

New series coming to Netflix in 2022

Away from zombies and on to vampires and extraterrestrial powers and magic, then you can binge-watch First Kill. It’s a story about a teenage vampire’s first target that turns out to be a vampire hunter from a family of celebrated slayers – I bet the story is already interesting.