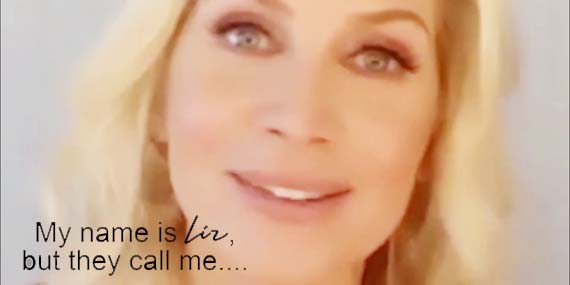 It was very hard to make decisions about the characters, I feel so incredibly sorry for all the rest of them I couldn’t include. Because to me every single role she played is a precious stone.
💎

The decision was made based on two different reasons:

1) The most iconics needed to be all included.

2) lead, recurring and guest appearances in tv shows, roles in movies and tv movies needed to be represented at least one per each category.❤️

I chose an interview from last year for Liz’s part because it was a blessing to have them and I wanted a recent one. 🥰

The choice of the scenes was made for different reasons and personal reasons.

I didn’t want to use very dramatic scenes because the video is funny and I didn’t want to make it sad. I used a few, but they didn’t have to show too much pain. So I went for funny, sweet and angry 😌

I am posting the reasons for each characters and scenes in the comments. They are very important to me but IG is about to cut me off.😅

– Juliet | I think that is one of the best scenes in term of acting, but also in term of “look what Juliet is capable of”. She stands up for herself and don’t buy lies. I love her.
– Erica | I chose that scene because it was the first shocking scene in the show. I didn’t expect Erica to react like that “what part of don’t trust anyone did you not understand?” I can hear her voice in my head. Also it’s a great representation of how much of a fighter Erica is. I miss her.
– Rachel | Her serial killer face in that scene is everything. Because you never know with Rachel. She is
unpredictable.
Seriously Sarah Connor in that scene.
– The Snow Queen | I chose that to have her superpowers shown and the broken glasses because her reflection on the mirror is actually how broken she was inside.
– Kim | I think that scene where she doesn’t want to listen to Kerry because she is tired of fighting, she had fought all her life to be who she is and Kerry is just new to everything and she doesn’t know how it feels to be in Kim’s position. I think it takes courage to say no.
– Carine | I chose that because look how cool she is, but I Iove her eyes in it, you can see Carine’s sensibility and emphaty.
– Anna | How couldn’t I choose that scene. It made me fall in love with her in that right moment. I think it represents a lot of her heart.
– Linda (McCartney) | I wanted to show what she went through, her illness, but not with a complete dramatic scene. I had to include this character even just for a second because Liz made an incredible job to portray her with so much honesty. I love this movie so much.
– June | I think this was one of the most incredible performances of Elizabeth. It’s the one I chose because she deserved so many awards for it. I also chose it because it is from SVU and the production is the same of FBI: International.
– Carol | I am so excited for her to play this role again. I chose the scene because she was so funny in it. The faces she pulls off!!!
– Chloe | Well I had to add a character that plays the role of an actress. And I think this is one of those roles so completely unusual and freaking hilarious. If you watched the entire soap opera you can find in DVD you know. And also I know Liz adored working on this movie.
– Julia | I had to add this role because I love the movie (I know a scene where she is old should be in this video). It’s one of the first theatrical release of her career, she had dark hair… I bet people are always shocked when they find out she played that role. The scene was chosen because of the love for her husband in her eyes. She has never doubted him. Relationship goal.
– Deb | How couldn’t I add the 3rd time in a row that Lost people killed her characters? 😅 No kidding. I loved her role here. This scene is the Deb who was still walking on the right path and the monent she met her future husband that changed completely her life and made her lost who she wanted to be.
– Limbrey | This role is one hell of a challenge, so of course I included it. I wanted to show her illness and the physical challenge to play her, because sometimes playing someone is not only mentally, emphatically and psychologically a challenge. Limbrey was all of them.
– Olivia | This movie is so important to be because the character is the most similar to Liz. The scene with Olivia and her mom because this relationship was one of the best I have her seen and it’s so close to Liz’s mom, who I am incredibly grateful for Liz in my life.
– Martha | This heroine with her poker face that had the entire responsibility on her shoulder. Proud of this role, of this movie and of the amazing executive producer named Elizabeth Mitchell.
– Linda (Gia) | The first role I have ever seen her play. So it is very important to me. This scene is my absolutely favorite (till the end of it) of the entire movie.
– Charlie | It doesn’t happen to every actress to play the president of the United States, so I am incredibly proud of Liz because she nailed it. I love Charlie’s morals, her emphaty, her caring, how incredibly good she is. A role model in politics. So impossible to see. But Charlie is different.
The end… With “The president if the United States” and Charlie saying “you don’t have a choice” with double meaning of not having a choice to call her president, but meaning that we don’t have a choice of not to bow in front of Liz’s talent.