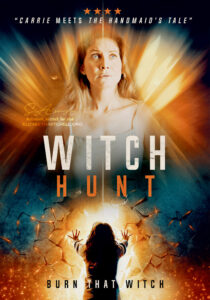 The witch trials come to life in modern day America and no one is safe from the persecution or execution. Claire (Gideon Adlon – The Craft: Legacy) and her mother (Elizabeth Mitchell – The Expanse, The Purge: Election Year) are part of an underground movement in charge of ferrying women accused of witchcraft to safety.

All is well in their world until a new charge brings the witch hunters to their door. Will they escape with their lives or will they also be charged with the ungodly crime of being a witch?

In a modern America where witches are real and witchcraft is illegal, a sheltered teenager must face her own demons and prejudices as she helps two young witches avoid law enforcement and cross the southern border to asylum in Mexico.

The director said this about the movie in an interview:

It’s about a modern-day witch hunt in a world very similar to our own, but in America witchcraft is illegal and there’s a repercussion for that. It’s very female centric, really revolved all around women and spooky.

Liz about the movie

While she was filming it, Liz told us that she’s loving filming this movie.

On her official ig she wrote:

WITCH HUNT is going to SXSW!!! I’m so excited about this. @ellecallahan is a fiercely talent director and I loved working with her. The entire cast impressed me. @gideonadlon is soooo good. Beautiful, powerful and true. @abbeycowen is a wonder. So beautiful with a quiet gorgeous talent, and @echocampbell made me smile while breaking my heart. @therealcamargo , I mean. He’s perfect. The twins are a joy. Funny, natural and what a gift they have. On a side note, it was fun to be a brunette for a bit. Oddly, I got hit on. A lot. .
I get to see this in March. Happy birthday to me!

And also wrote this to us about the women of this movie: 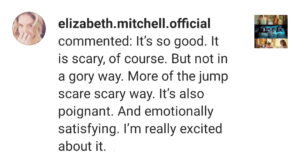 Jess Varley: “Liz!! Beautiful inside and out!!”

Echo Campbell:@elizabeth.mitchell.official Thanks. You are the best! ❤️