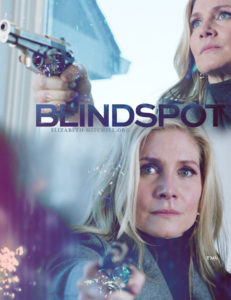 At a company party, Evan Myers and Scarlett Myers (Elizabeth Mitchell) are about to take their son, Thomas, home before security comes in and demands that everyone hand over their phones since there’s been a security breach at a research facility.

The company builds robotic spacecraft and was working on secret project with the D.O.D.. They weaponized a satellite, equipping it with missiles.

The stolen data during the party includes the launch codes for those missiles, but the investigation team couldn’t find them.

Scarlett reported Evan left that morning with Thomas, whose new high-tech insulin pump can store data on it, so that’s where the stolen files are and CIA caught Russian operatives who were planning to take control of the satellite.

Special Agent Weller (Sullivan Stapleton) goes to talk to Scarlett and assures her that an Amber Alert has been put out and asks if her husband acted strangely. The mother tells him that Evan was working on a big project and that now she’s worried since both their passports are missing. She begs him to find him because she cannot live withot her son.

Evan’s car is spotted at a gas station. Thomas tells his father that he needs to go to the bathroom. Outside, a man approaches Evan demanding to know where the kid is and then shoots him while and the boy cries out from the store.

The team identifies the shooter as a Russian operative, Nikolai, and notices that he chased after Thomas because he knew the data is in the insulin pump.

Evan paid a detective to follow his wife and from that investigation the team gets photos of Scarlett meeting with Nikolai, realizing the woman is the one who stole the codes and that his father took the boy to protect him.

Thomas calls his mother to tell her what happened and where he is. Scarlett promises to get to him and leaves the bodies of two agents (sent to capture her) lying in her house.

Thanks to Evan, the team finds out the kid’s location, but Scarlett arrives at the cabin before them. She’s relieved to have her son back in her arms and tells him she loves him.

When Thomas identifies Nikolai as Evan’s shooter, his mom begs him to trust her, telling him his father is a bad man. Nikolai reports that the FBI is there, and a shootout begins. Weller and Zapata enter the cabin as Scarlett declares they’re not taking her son away from her.

Weller assures Thomas that his father is okay and that he’s trying to protect him and asks Scarlett to stop using her kid as a shield. The woman tells her son that she loves him so much, but Zapata urges her to prove it by letting him go and turning herself in. Thomas begs her to do what they say and finally the woman surrenders while asking her son to forgive her. Weller takes Thomas away as the rest of the team arrests Scarlett.

At the hospital where father and son are reunited, Weller says that Thomas’ life is never going to be the same because of his mother, while Jane (Jaimie Alexander) comments that in the end Scarlett put him first and that despite of what she did, she still loves him.

Martin Gero (EP): “So so stoked to have Elizabeth Mitchell on the show.”