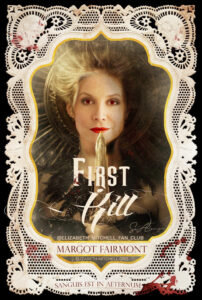 Mitchell will portray Margot, who is part of the Fairmont vampire family

“So excited for you to meet Margot. She’s a Mom, also, a vampire.”

“Talk about women, oh my goodness, all the people on the call sheet are female. The first four people on the call sheet are all women. We have female directors, female writers, and so many female characters. The world feels incredibly feminine, it’s similar to Elle (Callahan)’s in that way. My character is the matriarch of the vampires. I can’t tell you much about the story, but from what you’ve read and seen, it is a bit of a matriarchal take on the vampire world. I really love that.”

The one-hour show is based on the short story of the same name by Victoria “V.E.” Schwab that was published in the Imprint story collection “Vampire Never Get Old: Tales with Fresh Bite” in September 2020. Netflix has ordered eight episodes. Production recently began.

In the show, when it’s time for teenage vampire Juliette Fairmont (Hook) to make her first kill so she can take her place among a powerful vampire family, she sets her sights on a new girl in town, Calliope Burns (Lewis). But much to Juliette’s surprise, Calliope is a vampire hunter, from a family of celebrated slayers. Both find that the other won’t be so easy to kill and, unfortunately, way too easy to fall for.